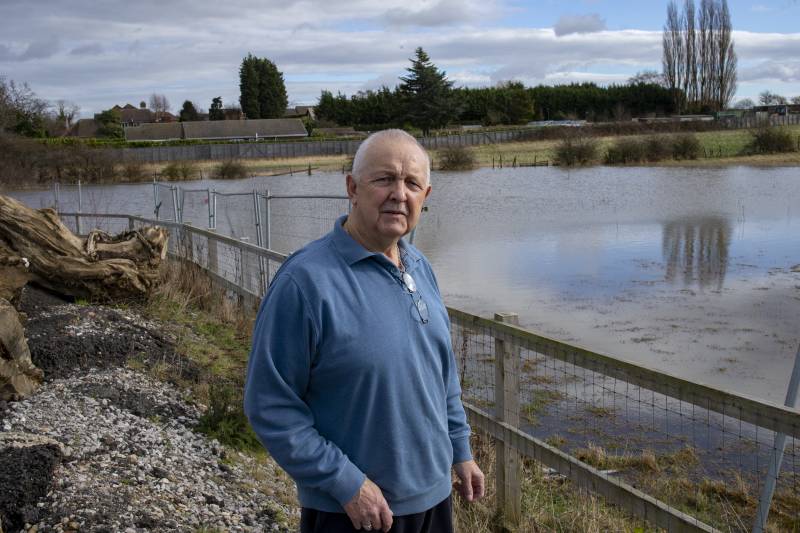 WATERLOGGED future housing sites which have been officially adopted for development by Barnsley Council have to be amended after being hit by more flooding last weekend, campaigners have urged.

Lee Lane, Royston, has been swamped following days of heavy rain after back-to-back storms, despite being included in the council’s local plan development blueprint for future housing.

Lee Lane – one of the biggest patches of land in the council’s local plan – could yield almost 1,000 homes in the next decade.

Anthony Todd, of nearby Newtown Avenue, told the Chronicle: “Everyone who lives – or even drives – near Lee Lane has repeatedly spoken about their concerns whether that’s to each other, local councillors or in the public consultation stages.

“It’s waterlogged every time it rains, so why anyone would want to buy a house on there is beyond me.

“This weekend’s rain turned it into a large lake, but that’s not unusual.

“It’d be great if those who end up buying homes there could see it beforehand.

“Building on what is quite clearly a flood-prone site is beyond madness.”

The site – known as MU5 in the local plan – already has a 166-home development being built, but plans for a 115-home estate and a convenience store have also been earmarked for approval in outline form.

The area is akin to Darton, according to Coun Steve Hunt, who has continually opposed plans to build houses off Darton Lane, which he says is another flood-prone field.

“When it becomes clear that sites are unsuitable, the council should look elsewhere,” he added.

“Residents are extremely concerned, like I am, about these developments.

“Sites get incredibly wet at this time of year and I’m not sure I would fancy buying a house where ponds appear every winter.

“Flooding is a growing issue each year as we see more extreme weather events, making some sites totally unsuitable for housing.

“Due to a growing population there is a need for more housing in Barnsley, but all plans submitted should be properly scrutinised and must take into account the views of local people.”

A council report into Lee Lane’s suitability for mass house-building confirmed flood concerns had been lodged.

The report added: “The Royston masterplan was adopted by full council on July 29 and identifies a number of development phases.

“This parcel of land is identified as one of the first phases for residential development with a small retail element – other phases will follow in due course.

“The site is currently a greenfield site with scrub vegetation, pasture, matures trees and hedgerows.

“The frontage to Lee Lane comprises two large buffer strips on the northern boundary adjoining Lee Lane, and a buffer strip to the western boundary will ensure an attractive boundary is retained and will include an active travel route, in accordance with the adopted masterplan.

“Objectors have raised the issue of drainage on the site and part of it was flooded in the heavy rains of 2020.

“In addition, there are watercourses crossing the site which the developer is aware of and which must be protected.

“Yorkshire Water and Barnsley Council’s senior drainage engineer have no objections subject to planning conditions which will prevent excessive run-off to the watercourses and avoid future flooding.”