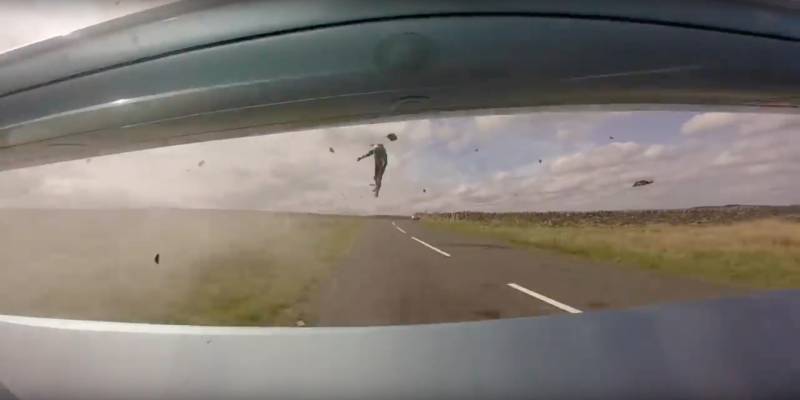 HORRIFYING video footage captured from three different angles shows the moment a motorcyclist was thrown into the air in a head-on crash which left him with life-changing injuries and the driver of the car behind bars.

The 35-year-old rider, from Gawber, suffered a broken back, sternum and wrist in the collision which saw him catapulted into the air and his Suzuki K7 bike destroyed.

The 41-year-old driver of the Subaru that hit him had been travelling at 70mph on the wrong side of the road around a blind left-hand bend on Mortimer Road, Sheffield.

In dashcam footage from the car released by South Yorkshire Police, the driver – Florian Pratt, from Nottingham – can be seen losing control of his vehicle as he exits the bend before he collides with the rider who had applied the brakes.

Footage taken from a car travelling behind Pratt shows the full extent of the impact from a different angle, as the motorcyclist is thrown several feet into the air over Pratt’s car.

Roads policing constable PC Phil Carson said: “In an ideal world, everyone would drive with care 100 per cent of the time, but sadly this isn’t the case.

“The offending driver had no previous driving points or convictions, but on this occasion he demonstrated an exceptional lack of judgement.

“Thankfully, the motorcyclist was wearing a full leather air bag suit which activated and inflated as he was propelled off his bike. Without it, in a collision at this speed, he would most likely have died.

“We often see motorcycle riders wearing shorts and trainers, and they think it’s OK because they have a helmet on – it’s not.

“You might be travelling in a safe manner, but that doesn’t mean everyone else is.”

Pratt was sentenced to 16 months in jail after admitting to causing serious injury by dangerous driving, and also received a three-year driving ban, at Sheffield Crown Court last Thursday.

Judge David Dixon said: “Anyone in control of a high-powered sports type car needs to be aware of the vehicle’s capability and their own capability.

“You failed to take any account of the bend that led to this incident. The message must go out loud and clear. If you drive any vehicle you must drive with care.”