Spritely Joan is a strong contender for award... 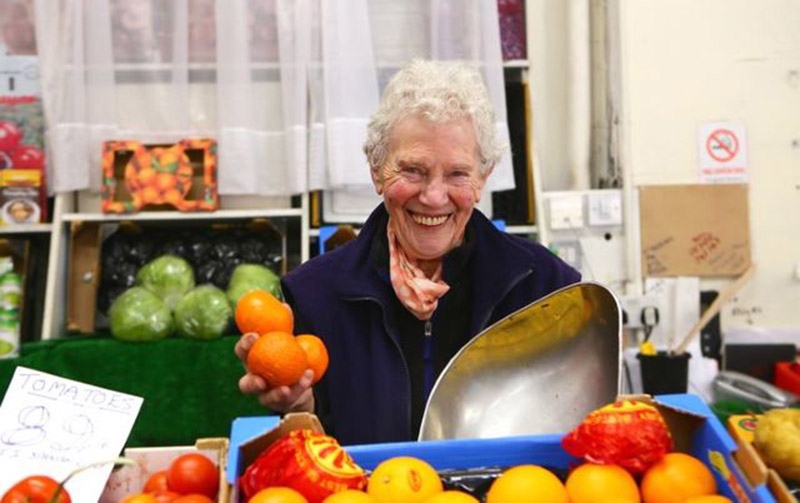 A NINETY-YEAR-OLD market trader from Barnsley who gets up at the crack of dawn six days a week has been named as a finalist in the Amplifon Awards For Brave Britons 2019.

Grandma Joan Ward, who has sold fruit and veg from her stall for the last 70 years, has reached the finals of the Active Agers category in global hearing specialist Amplifon’s search for ‘The Best Of British’ heroes.

Joan, of Daleswood Avenue, Barnsley, wakes up at 6.30am every day and sets out her stall even carrying sacks of potatoes by 8am. She even drives the van and collects deliveries.

She said: “I don’t need a walking stick or frame to get round my stall. I might be 90 but I honestly feel more like 60.”

Joan worked in a shoe shop when she passed a green grocer’s stall two days a week on her way to work. She began chatting to the chap Fred Ward who ran the stall and eventually they got married.

Joan joined Fred running the stall in 1952. Fred died in 2006 and Joan has continued to run the stall ever since and also owns Wath’s Value For Money Market in Rotherham where her business is based.

Joan said: “I’m not thinking of giving up my stall yet. As long as I feel fit and able I will continue working. I’ve got to think about my customers, some who I have known for donkey’s years. I don’t want to let them down.

“I love to chat to the people who come to buy my fruit and veg. And children I served years ago now bring their own children to the stall which is lovely.”

Joan was born in her gran’s fish and chip shop and helped deliver fruit and veg from her father’s horse and cart as a young girl.

She said: “I have never really thought about my age because the years have gone by that fast. Time flies when you are working hard.”

Her sister Pat, 79, runs a café in the market, and daughter Catherine, 60, a card shop. The finals awards luncheon will be held at the Army and Navy Club, Pall Mall, London, on Tuesday.

The judges will choose an Overall Hero Award winner from the category winners who will win a trip to Italy for two.