Couple vow to help others who have lost a child 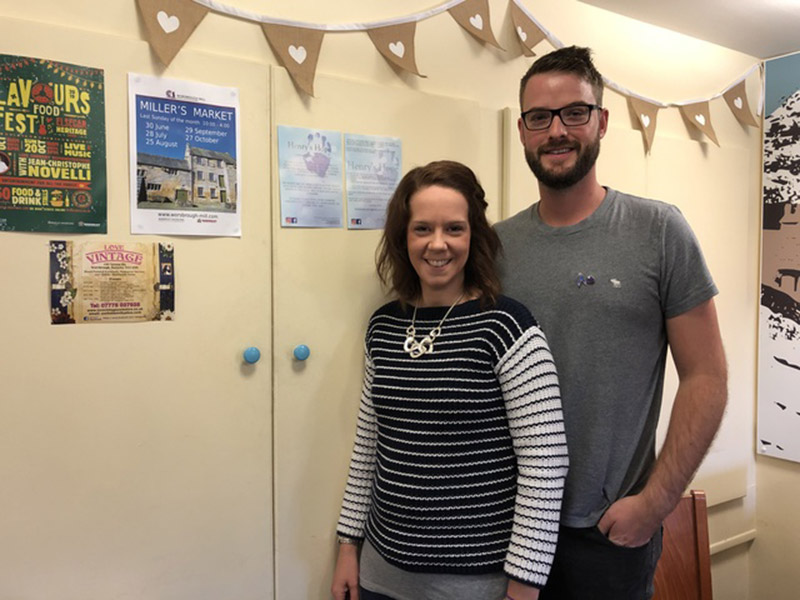 A COUPLE whose baby died at four days old have founded a charity to support bereaved families who have lost a baby.

Bethany and Andy Pocock, both 31, lost their son Henry in March 2017 following complications during his birth at a hospital in Surrey.

When Bethany was 34 weeks pregnant, she went to hospital when she noticed her unborn son had stopped moving.

She was monitored for several hours before doctors decided to break her waters, which Bethany believes sent Henry into shock.

“I had gestational diabetes which caused me to have excess water and after they broke the doctors realised I had placenta abruption,” said Bethany, of Newhill Road, Smithies.

“The cardiotocography (CTG), had also been showing signs that Henry was not OK and when they realised the severity of the situation I was rushed in for an emergency Caesarian section. When Henry was born he had to be resuscitated for 15 minutes.”

Henry was left severely brain damaged due to the lack of oxygen during his birth and he was rushed off to another hospital in the area where he underwent hypothermia therapy, which involves cooling a baby’s body temperature to around 33 degrees centigrade by placing them on a waterproof blanket that contains cool circulating water.

The treatment reduces the infant’s temperature and is said to reduce brain damage. Henry received treatment for four days and despite the hospital’s best effort, doctors told Andy and Bethany that he had minimal brain activity and there was nothing more they could do. He died the next day.

“We were completely broken,” said Bethany. “We also have two other sons, Austin, who was three at the time and Bradley who was five, and dealing with their grief on top of ours was overwhelming. We were set to move to Barnsley following Henry’s birth and Andy had handed in his notice to work, in addition to us giving notice on our tenancy. It was an extremely difficult time.

“In 2018, we decided that as a family it would be the right thing for us to continue with our move to Yorkshire and we needed a new beginning. I realised then that there wasn’t much support for Barnsley families who had lost a child so me and Andy decided to set up Henry’s Hope.”

Bethany said: “I gave birth to my daughter Madeline in July and the pregnancy was very hard, as we were all full of anxiety and when she was born it was bittersweet because Henry is not here to see her.

"We decided to offer support for those who are in a similar situation to us and do something positive for Henry, to give people hope in their lives and future pregnancies. We want people to know they are not alone in this situation and we are here for you.

“Some families who experience the death of a baby are not active on social media, where a lot of support pages are. We wanted to do the charity our way and we will be working closely alongside other organisations and the bereavement midwife at Barnsley Hospital, Lisa Rich, will be on hand to also offer support.

“We will also look to set up a men’s group as during our experience Andy took on a lot of responsibility, although he was hurting just as much. Men are often overlooked in this situation and we feel it is important for them to speak out.

"In the meantime they are more than welcome to join in the sessions, which will be informal."

Lisa Rich said: "I care for families who suffer the death of their baby during pregnancy or in the early days and weeks of life.

"I provide bereavement support to these families but sadly there are no local support groups or counselling services available in Barnsley. It has been heartbreaking to know that I have nowhere to direct these families for the help and support that they desperately need.

"I cared for Bethany and her family when they became pregnant again after their little boy Henry died. After the birth of Madeline, Andrew and Bethany felt that they wanted to do something to help other families going through the same circumstances.

"Knowing that they are setting up peer support groups for families who suffer the tragic loss of a baby means so much to me, finally having somewhere to signpost for peer support is going to make such a difference to the journey of families suffering the unimaginable and I will do everything I can to support ‘Henry’s Hope’ to provide support families in need."

The first bereavement group begins on October 7 from 7pm to 9pm at the Millers Tea Room at Worsbrough Mill and Country Park. For further information on the sessions, visit Henry’s Hope page on Facebook.