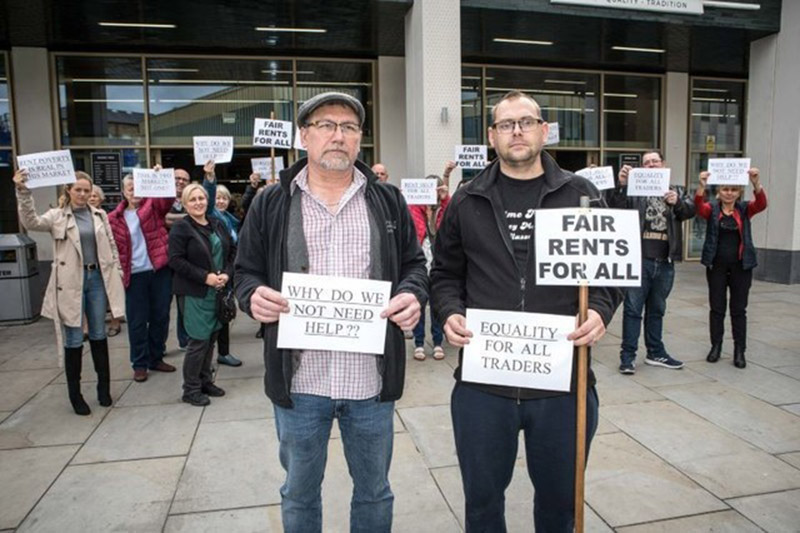 TRADERS left their stalls at lunchtime on Wednesday to protest against changes to rents in the new Glass Works market hall under which charges to upstairs traders were slashed by half.

The changes, introduced this month following a consultation with traders, are in response to complaints from the upper floor of slower trade in the afternoons when compared to downstairs.

John Burton, 57, had been trading upstairs before moving to the lower floor earlier this year and has been in the market for 25 years.

“The move cost us £4,000 but we did it because we weren’t getting the business upstairs,” said John, owner of John’s Heel Bar.

“We’ve been downstairs five weeks and we’re no busier than we were upstairs - we’re struggling down here as well.

“The main point is we aren’t getting the footfall in the market we used to get.

“On the last three Thursdays, I’ve probably taken £200. We’re not supposed to trade on Thursdays but we’ve got to.

“That’s what gives the market its character and brings people in. You’ve only got to listen to the customers.”

Mark Arnold, 57, criticised the consultation process for only taking into account the views of a small selection of traders.

“They haven’t even spoken to us - they’ve been having what they’ve called meetings without takingminutes, because when we’ve asked to see them they haven’t been able to show us.

“That’s not a meeting, it’s a gathering.”

Martin added: “A select number of traders have decided who gets half-price rent. The first we knew of it was a letter after the decision saying we had voted.”

Coun Tim Cheetham said all traders were included in the consultation process, and seven chose not to respond.

“As a responsible landlord, we have regular discussions with our market traders about improvements that can be made to the market,” said Coun Cheetham, cabinet spokesman for place.

“Recent conversations with traders suggested there was a difference in trading position between the ground level and first floor of the market.“We decided to look into this - opening up further discussions with traders. After listening to feedback, we proposed a 50 per cent reduction in rent for first-floor traders.

“After taking this to a consultation, the results showed that the majority of traders who responded were happy with the proposal. This change was implemented from September 1.

“Ground-floor traders also have the option to move to the first floor if they wish to take advantage of the discount.

“The rent reduction will not only help support traders on the upper level, but also help attract new businesses into the market to ensure it continues to be a vibrant shopping destination.

“The market will be supported by the addition of new operators in Market Kitchen this October, which promises to be an exciting addition to the market, wider Glass Works and town centre.

“As always, I would like to encourage the people of Barnsley to continue to support our fantastic traders and brilliant market by shopping locally.”