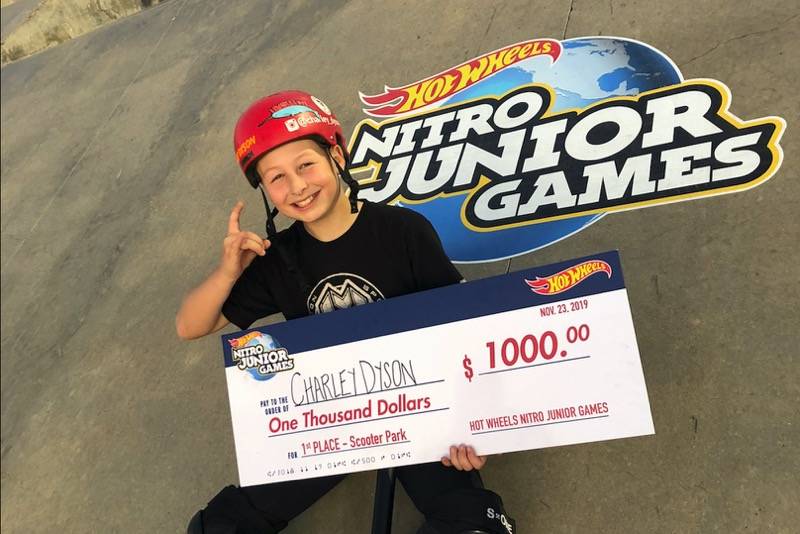 A BOY who was named the world’s youngest professional scooter rider at just eight years old has been nominated for a Young Champions award on the back of a successful sporting year.

Wombwell lad Charley Dyson, who is now 12, has had a wonderful year competing across the globe, even winning £1,000 competing in California earlier this year.

The lockdown has halted Charley’s plans for the near future, but his dad, Andy, says he remains in good spirits.

The 37-year-old said: “Charley is quite bored at the minute which is expected, but he’s still happy and hoping to compete again as soon as he possibly can.

“He’s gone from being overly active, to only being able to ride his scooter for about an hour a day, and then playing football in the garden, it’s been a big shock for him.

“We’re managing to keep him occupied as well, he’s at a level now with his scooter where he should be able to slot straight back into the elite level once lockdown is over.”

Scooting plans for the future remain in doubt for the Netherwood Academy pupil, as multiple events have already been cancelled, but his dad hopes summer competitions will still go ahead.

“We were meant to be in Norway last weekend, and elsewhere in Europe last month, but these have all been cancelled,” he added.

“We did manage to get out to Belfast just before the lockdown began, where Charley finished sixth out of a possible 40 competitors, but he was the youngest there by a mile.

“We’re all really proud of him and everything that he’s managed to achieve so far.”

Upon hearing of his son’s Young Champions nomination, Andy said: “It’s amazing and we’re absolutely flattered that he’s managed to get a nomination.

“Being a Barnsley lad myself, I love absolutely everything to do with the town, so when something like this happens it really does mean a lot.

“Obviously a few years ago he won the Pride of Barnsley young superstar award, and that was amazing, so to be nominated for another is fantastic.

“Just to see people giving Charley the recognition he deserves for all the hard work he’s putting in puts a smile on my face.”