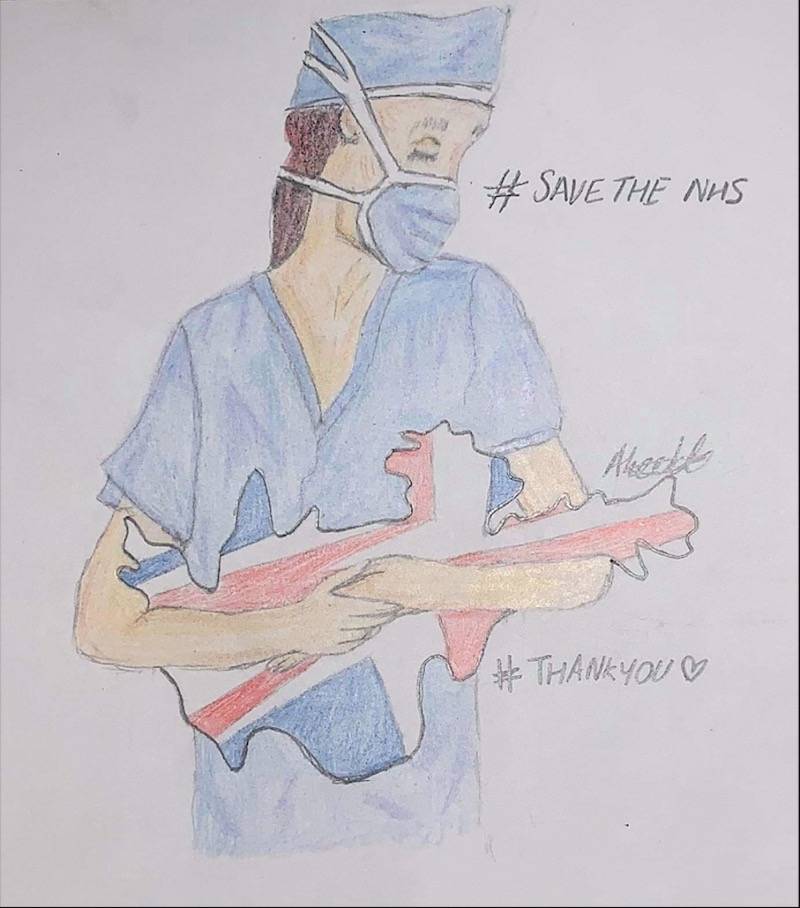 THE artist of a drawing dedicated to the staff at Barnsley Hospital is thankful to the staff that ‘saved her life’.

Abi Keeble, 18, who has autism, has garnered online support after posting her artwork, dedicated to the hard work of Barnsley’s NHS staff, to Facebook.

During self-isolation, Abi has turned to her art to express her gratitude to those who helped her and her family over the past two years.

The drawing, which has received a positive reaction online, will now be displayed at the hospital after Barnsley Hospital reached out to Abi asking for a copy.

Abi, of Halifax Street, Old Town, said: “I just wanted to thank the NHS for all of the amazing work that they do.

“I have mental health issues and the NHS has always been there when I need them the most.

“Recently, my family have had to depend on Barnsley Hospital quite significantly, as they’ve saved our lives.

“I can’t imagine how much stress they are under at the moment, so I wanted to show my support.”

Abi was shocked to learn that the art work will now be displayed at the hospital, and hopes that more people will reach out to the NHS and show their support.

“When I heard that Barnsley Hospital wanted to put the drawing up I couldn’t believe it.

“I want to carry on supporting the NHS and continue with my art in the future.”

Andrew Keeble, Abi’s dad, added: “Abi has struggled with her mental health over the past two years.

“Because of this she has been a regular at Barnsley’s A and E and uses their other services quite often.

“The staff there have saved her life several times and recently her mum’s life too.

“In the last 18 months I have been incredibly ill, and I’m now on dialysis – I dedicate my life to them now also.

“It’s very evident how much the NHS means to us as a family.

“We’ve all been incredibly touched by the online reaction to Abi’s artwork, and to hear that it’s been picked up by Barnsley Hospital is phenomenal.

“This has given her a lot of confidence in herself, she’s always been an artist ever since she was little, so to see her doing what she loves is amazing.”

Her actions have also seen Abi nominated for a Young Champions award.

Abi said: “It’s amazing to be nominated for a Young Champions award. All I wanted was to say thanks to the people who saved my life.

“It’s the last thing I expected.”

New booster vaccine to be rolled out