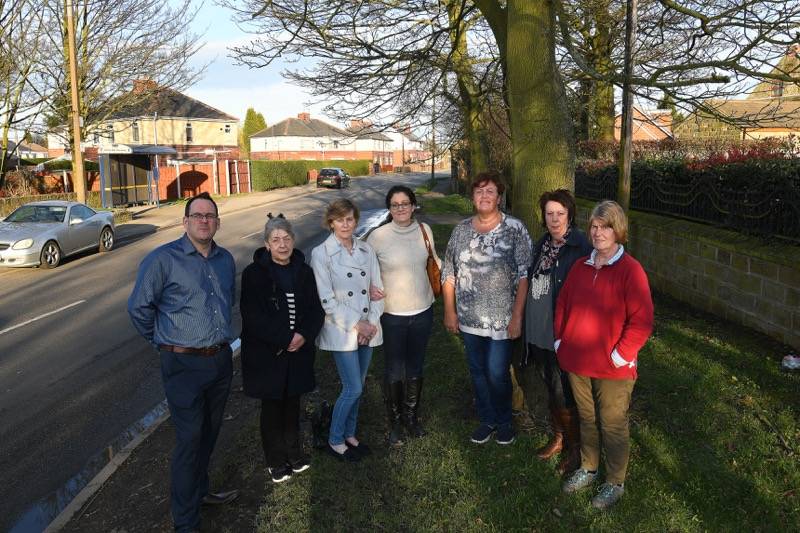 A CONCERNED resident is considering selling his home over fears his family may be seriously injured or killed due to speeding motorists at an accident blackspot.

David Connors, who lives on Common Road, Brierley, contacted the Chronicle after he caught two accidents on CCTV on the stretch of road, which is used regularly to travel to Grimethorpe or Great Houghton, and expressed his concern at how often motorists speed down the road.

“It doesn’t matter whether motorists are travelling towards Grimethorpe or Great Houghton, people are flying up and down the road at 60mph and they get caught out by the bend,” said David.

“There have been at least two accidents this month. One car hit a tree and snapped it and another car slid into a lamp post and flipped on its back.

“Motorists are not patient and overtake on the bend which is dangerous because you can’t see. Also, a little further up the road the speed limit jumps from 30mph to 60mph, so people speed up after the bend or if they’re coming into the village they don’t slow down in time.

“We’ve already had a fatality in recent years and I don’t know why more is not being done to slow motorists down on this road.”

In September 2018, 58-year-old mum-of-two Jacqueline Wileman was killed as she was walking on Common Road after a stolen HGV, travelling at its top speed, failed to negotiate a left-hand bend and careered into her.

Following her death, Brierley residents began calling for an anti-speeding campaign to be carried out at the scene and highlighted the history of collisions on that stretch of road.

In March last year, South Yorkshire Safer Roads Partnership rejected the bid for a camera van, saying the road didn’t lend itself to having one parked on its route.

In July, a project dubbed Operation Slowdown was carried out on Common Road by South Yorkshire Police’s roads policing group to address local concerns of speeding vehicles at a neighbourhood level. A speed indicator device was also fitted on a lamp post,

however David said this is having very little impact.

“I have four children and I’m worried about letting them play outside because of how fast these cars go. It doesn’t matter what time of the day it is, they just don’t seem to care. As soon as they hit the bend they’re off and it’s near a children’s play park which is even more alarming.

“Pedestrians also regularly walk along Common Road whether it’s walking their dogs, going to the park or up to Burntwood Court Hotel and if a motorist lost control of their car and hit a pedestrian, they don’t stand a chance, just like Jackie didn’t.

“It’s a huge hindrance deciding what to do for the best because the road is, quite frankly, beyond a joke.”

Mrs Wileman’s family – spearheaded by her brother Johnny Wood – are campaigning for the current death by dangerous driving sentence of 14 years to be lifted in order to allow judges to treat instances in the same way as murder or manslaughter.

They are being backed by Barnsley East MP Stephanie Peacock, but so far the issue has been put on the back-burner as a result of the recent general election and now concerns over a full-on coronavirus lockdown.

Coun Jeff Ennis, who represents the North East ward, said: “Barnsley Council has no control over the speed limit on Common Road its highways. We did have a speed indicator placed on Common Road and we are looking to have it reinstated as it is not working at the moment and I will be speaking with Sergeant Richard Wilson about it.

“It is a continuing concern for residents and myself as a ward councillor and I won’t be happy until something is done about the speeding on this road.

“People regularly walk along the road and there is a nursery in the park so there are young children about. Our ultimate goal is to have a 20mph limit implemented across the village, but it’s difficult to have this passed.”