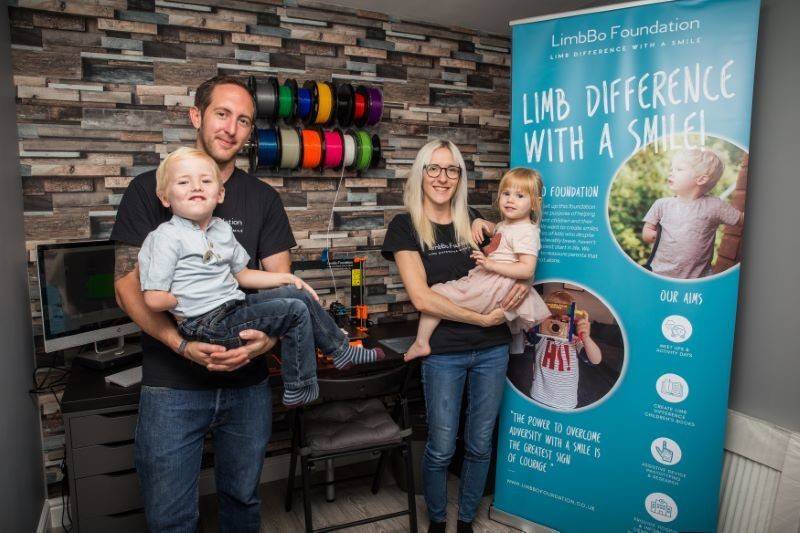 A COUPLE who design artificial limbs for children say that their charity keeps on growing, with items they make going to kids across the globe.Adam and Katie Dengel, of Shepherd Way, Royston, started learning about artificial limbs after their son Tommy, now five, was born missing his right forearm due to amniotic band syndrome - a rare condition in which stray bands of tissue wrap around the limbs in the womb and cut off blood flow.The pair set up the LimbBO Foundation UK in 2018, using the high-tech process known as 3D printing to make specially-adapted limbs and items for children with missing limbs.

These items include adapted bikes, adapted drumsticks and more. The 3D limbs are customised for each child and different themes are added like Wonder Woman, Buzz Light Year, Paw Patrol, The Hulk, Captain America and more. The LimbBO Foundation collaborates with the company Team Unlimbited, a charity which created a basic design of a fully functioning assistive device which can be downloaded for free by anyone with a 3D printer.Each piece is made using a 3D printer in Adam’s garage-turned-workshop and as the charity is now officially registered, Adam, 30, said it is going from strength to strength.One of the main things Adam says he is proud of, is that he and Katie are now sending specially-adapted limbs to families all over the world.“We have sent out more than 80 bike adaptations, six custom adaptations and more than 40 customised Team Unlimbited arms/hands across the world this year and we have also provided 14 limb-different children with brand new fully adapted bikes at a cost of between £150-£250 each but at zero cost to the families. These were all delivered free of charge by our sponsor Bapp for Bolts.“We have sent them to Mexico, Miami, Holland, Germany and even South Africa,” said Adam. “The demand is growing and it’s so amazing as parents send across pictures of their children with their new limb or adapted bike. We’ve gone from working in our bedroom to coverting part of our house to a printing room. I love what we do and it’s great when we receive a photo from parents, we put them all in the printing room so you can see them when you look up from working. It really does make you smile. I’m so proud of where the charity is now. This started as a conversation on the sofa when we were watching telly, so to see where it is now is just amazing.”As well as creating items, there’s an annual summer event the LimboBO Foundation holds, which aims to bring families and children with missing limbs together to chat, have fun and play together. This year’s event was held at Cannon Hall and saw around 35 kids attend.“It was really great,” said Adam. “The farm supports us and we have a space which we have to ourselves. It was important for us to get the kids together and it makes a real difference to them too. “Some of the kids have anxiety so it’s important for them to meet someone else with a limb difference so they don’t feel as different. It’s also good for the siblings as they can meet other siblings of children who have a limb or limbs missing.”Adam and Katie recently travelled to Florida to the Never Say Never Foundation limb difference pirate camp, where they presented six 3D arms to six American children.The charity’s next event is a Christmas party, where more than 100 people will attend to celebrate and enjoy the festive season.