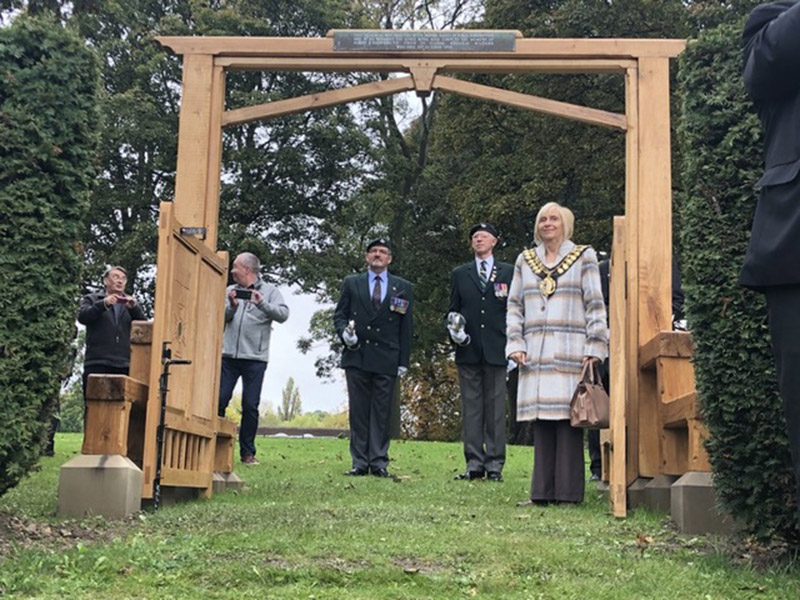 DOZENS turned out to watch the unveiling of a memorial gate dedicated to the only Barnsley man to ever receive a Victoria Cross for his act of bravery in the First World War more than 100 years ago.

Pupils from St John’s C of E Primary, Parkside Primary and Churchfield Primary were among those to attend the service of the unveiling at St John the Baptist Church, Royston, on Monday.

The Mayor of Barnsley Coun Pauline Markham opened the service alongside the Bishop of Wakefield Tony Robinson, Coun Caroline Makinson, Coun Joe Hayward and military representatives were also in attendance, in addition to relatives of Albert Shepherd.

Albert Edward Shepherd was enlisted in the army aged 17, and took part in the Battle of the Somme in 1916 and the Battle of Passchendaele in 1917.

On November 20 1917 at Villers Plouich, his company was held up by a machine gun at point-blank range.

Private Shepherd volunteered to rush the gun and although ordered not to, ran forward and threw a Mills bomb killing two gunners and capturing the gun.

The company, continuing its advance, came under heavy fire again, this time firing across the line of advance.

When the last officer and NCO had become casualties, Private Shepherd took command of the company and ordered the men to lie down. He then went back some 70 yards to get the help of a tank which was used to give cover to their advance.

His heroics were published in the London Gazette and he was awarded The Victoria Cross, the highest award for gallantry in the face of the enemy. The medal now rests at the Royal Green Jackets museum in Winchester.

The former gate in Albert’s memory was removed due to decay and the Royston Ward Alliance, Friends of Royston Cemetery, Barnsley Council’s bereavement services, SR Wesson Memorials and the North East Area team helped to fund the project.

The project has also seen support from the Leeds Diocese and St John’s Church. John Nyland and volunteer from the Community Workshop constructed the new memorial gate.

Coun Makinson said: “We are delighted that it has finally come to fruition and I am proud that the ward alliance was able to contribute to the last memory of Albert Shepherd.

“We have been planning to replace this gate for years and it is lovely to see so many people here honouring this Royston man.”

Beverley Oakley, the granddaughter of Albert, said: “We are very proud of our granddad for what he achieved and he will be commended for ever more. This memorial has been wonderful.”