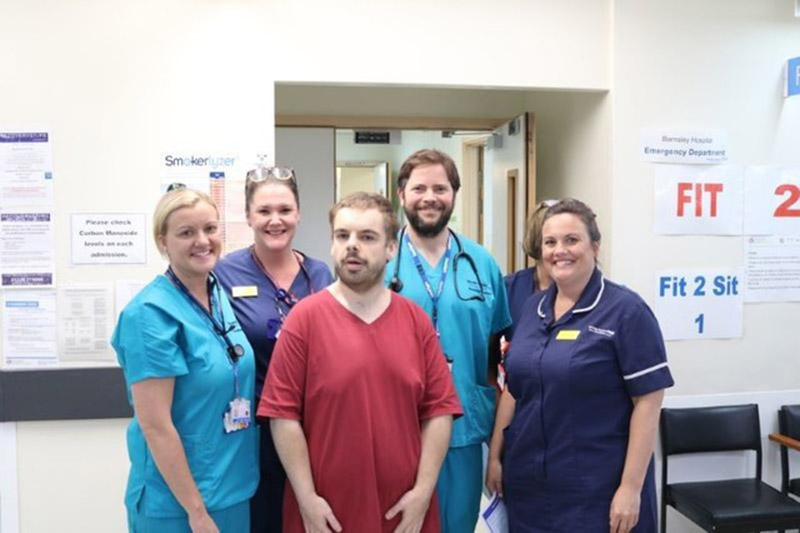 A DOCUMENTARY superfan’s dream came true after he travelled from Coventry to Barnsley to meet his TV heroes.

Adam McNamara, or Ad for short, has autism, dyspraxia, scoliosis and learning difficulties and gets a lot of enjoyment from watching TV programmes - including Casualty 24/7, the Channel 5 documentary filmed in Barnsley Hospital’s emergency department.

The 31-year-old contacted Barnsley Hospital to say he had been watching the show and asked if it was possible for him and his carer to visit the emergency department and meet doctors, nurses and other staff who featured in the programme.

The hospital was happy to oblige and last Friday, Ad managed to make his dream come true and travelled to Barnsley.

He also met camera crews from Channel 5 as they were filming again in the casualty department for a third series of the programme.

Viewing figures for the last series topped some of those for the best-loved television programmes that run parallel to the show.

Terri said: “It was an absolute pleasure to meet with Ad and his carer Neil and to be able to fulfil his wish of visiting the staff and the area in which Casualty 24/7 is filmed.

"All the staff involved were amazing and it was lovely to see how much joy Ad experienced from his visit.”

After the visit, a thrilled Ad thanked the hospital and said: “Both me and my carer really enjoyed it. We visited not only the A&E department, but the hospital restaurant, wards and X-Ray as well.

“It was a pleasure meeting Terri, Jeanette from learningdisabilities, the acute liaison nurse, the communications team, camera crew, physios and even the hospital chief executive.“

I really enjoy Casualty 24/7 and am looking forward to seeing the new episodes.”