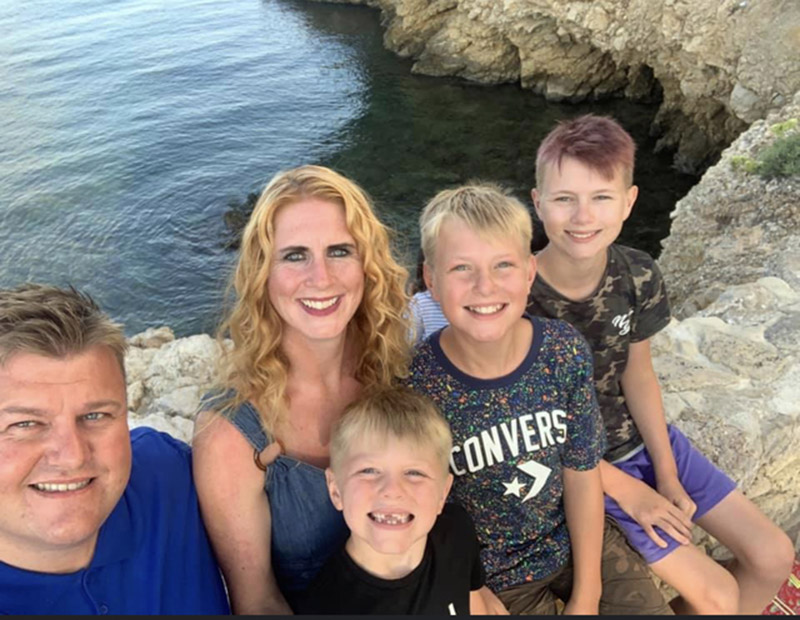 FRIENDS and classmates lined up outside a school to pay their respects to a 14-year-old boy whose devastated parents say went to bed healthy but ‘never woke up’.

A Lamborghini led the funeral procession of supercar-mad Lucas Fleetwood on Wednesday, taking a detour past Darton Academy where friends and teachers gathered outside.

Lucas, of Brattice Way, Mapplewell, died on September 6 after going to bed following his first day back at school.

His mum went to wake him for school the next morning and he was unresponsive. Emergency services were called but he could not be revived.

Lucas had just returned from a family holiday in Majorca and had enjoyed showing his younger brother Oliver, 11, around his new school that day.

His death came as a complete shock to the family, who still don’t know why he died.

Lucas was cremated on Wednesday and his parents Daniel and Stacey, not wanting a traditional resting place for his ashes, decided they wanted to create a memorial garden for the family to go to remember Lucas, as well as a place for other bereaved parents to use in future.

Daniel told the Chronicle: “Lucas was a fantastic big brother to Oliver and his youngest brother Carter, six.

“We are heartbroken by his death but me and Stacey knew straight away that we didn’t want Lucas to be buried surrounded by death.

“We wanted somewhere tranquil and private where we can go and remember our son. It will also serve as a place for people to remember their children and we want it to be a comforting area, not a place associated with death and horribleness.”

Daniel began looking for land where he could create Lucas’ Gardens – an area of remembrance for children. Currently there are no areas in Barnsley that have a memorial space specifically for children.

“We have found a place and we hope to develop this into Lucas Gardens, and we feel it is perfect for us.

“For other families who will have to go through this tragedy, we hope it will serve as a wonderful place to consider when it comes to laying their child to rest. It will be Lucas’ legacy that will last forever and it’s something positive to come from his death.”

The family said the support the family have received following Lucas’ death has been ‘brilliant’.

Stacey said: “The staff at Barnsley Hospital, the police, Darton Academy and Lucas’ friends have been brilliant. We have received so many messages of support and this garden is a way of giving something back to the community.

“Lucas was a great kid and we will miss him like crazy. He loved karaoke and he was a leader, especially with his brothers.

“He was also confident and so full of energy. It’s all very surreal and at times you don’t feel it’s real but this project is giving us something to focus on. Lucas loved being outside and in the garden so I know he will love this idea.”

Daniel set up a Just Giving page to raise funds towards Lucas’ Gardens, and so far he has raised over £6,500.

Daniel said: “The funding will allow us to landscape the gardens and purchase benches, shrubbery and a stone welcoming people into the garden. It’s not going to resemble a graveyard and we hope it will bring comfort to many families in the years to come.”

One of the businesses supporting the project is Hammerton’s Funeral Directors. Melanie Torley, office manager, said: “There is nothing for children in Barnsley and we are honoured to help get this project off the ground.

“We would love all our funerals to be 92-year-old people but that isn’t how life goes.”

To donate, visit the Just Giving page and search for Daniel Fleetwood.