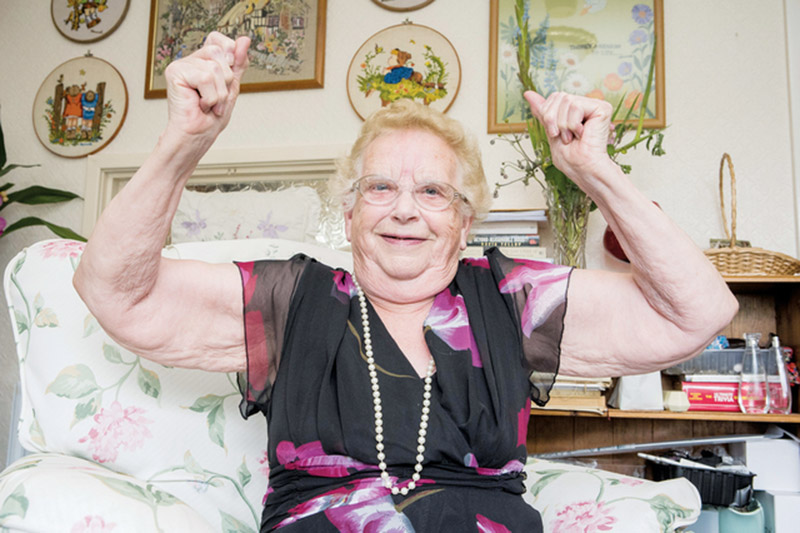 A NINETY-year-old woman is taking to the air for her first skydive to raise funds for Yorkshire Air Ambulance and Kirkwood Hospice.

Joan Horne, who is originally from Ingbirchworth but now lives in a village away in Birdsedge, said she ‘doesn’t feel her age’ whatsoever.

She may have metal plates in her knees, have arthritis and struggle with what she calls ‘good and bad days’, but Joan said she still wants to be adventurous and to be active.

“Age has never stopped me. On my 58th birthday I was in Kos and I went on a paraglide. I was always adventurous and I always have been that way.

“I was brought up and never had any girls to play with. I had a brother and when I was at school there were nine boys and just me in the class, so I sort have been male-orientated all my life.

“I’m a tomboy and I used to climb trees like there was no tomorrow,” said Joan, who has been married three times and has five children and seven grandchildren.

The 90-year-old said she has raised money for lots of different charities, but decided to choose the Yorkshire Air Ambulance for the lifesaving work they do.

She also chose Kirkwood Hospice as the Huddersfield charity is celebrating 40 years. The sky dive will be taking place in Bridlington on September 15 and Joan said she doesn’t have an exact amount she wants to raise for the charities, but is hoping to get as much as possible.

“I have been raising money for everything and everybody all my life,” said Joan.

“I have been giving sponsor forms out to everyone and have told people to pass them on to my friends.

“Some people have asked for extra forms so that makes me hopeful I’ll raise a good amount to be split between the two charities.”

Joan, who has a significant history with The Fountain Inn in Ingbirchworth, has spent most of her life being ‘busy’.

She said she worked every job imaginable at The Fountain, even running the place at one point. She has also worked in the restaurant trade so is used to being busy and on her feet.

“I do have my good days and bad days because of my arthritis, but that doesn’t stop me,” said Joan.

“I have done so much in my life and this is just something to add to the list. When I’ve told people what I’m doing, their mouths just drop open in shock. I am doing so much at the moment as well as preparing for the sky dive – I am writing a book about my life and looking into my family’s history in Ingbirchworth.

“There’s a lot going on and it is exciting, I’m looking forward to doing the sky dive. I’m not your typical 90-year-old and I like it that way.”

Anyone who is wanting to donate to the Yorkshire Air Ambulance or Kirkwood Hospice is asked to donate an amount directly to each organisation and to let both organisations know the donation is being given in the name of Joan Horne.