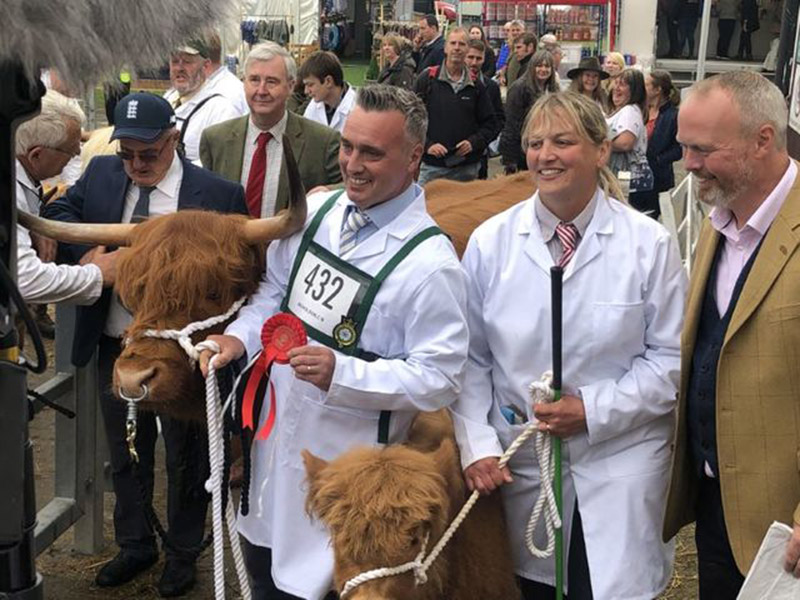 CANNON Hall Farm made its show debut at one of the UK’s biggest and most prestigious agricultural shows – and scooped first place.

David Nicholson, the youngest in the Nicholson farming family, stepped into the show ring at the Great Yorkshire Show for the first time with Highland cow Fern and her calf Ted.

The cattle are two of the most popular animals at the visitor attraction – which opened to the public in 1989 – after being purchased at a cattle auction in Oban back in February by dad Roger and his pal The Yorkshire Vet, Peter Wright.

It took a full month to prep Fern, with the farm team behind the scenes working hard on grooming and halter training.

But the work paid off when farmer David led her into the ring and she came first in the ‘senior heifer’ section. She then scooped two other awards, ‘reserve female champion’ and ‘reserve champion’.

David said: “I was really nervous, I had never done anything like that before and its a matter of pride because we were representing the farm and our family. We never expected to win so it was an amazing surprise.”

The farm has been representing its home town every day in the Parade of Champions and has been overwhelmed with the support.

“It’s a really amazing feeling walking the parade of champions – you can understand why people take it so seriously. It’s a proper stadium feel,” said David.

The farm’s journey to the ring appeared on the Channel 5 TV show ‘Today at the Great Yorkshire Show’ last Wednesday and you can view the farm’s own videos on YouTube which includes an emotional live broadcast from brother, Robert.

It was an especially touching moment for the family as the Nicholsons have been proud farmers for many generations, and dad Roger and Grandad Charlie used to regularly show their stock before the farm became a visitor attraction.