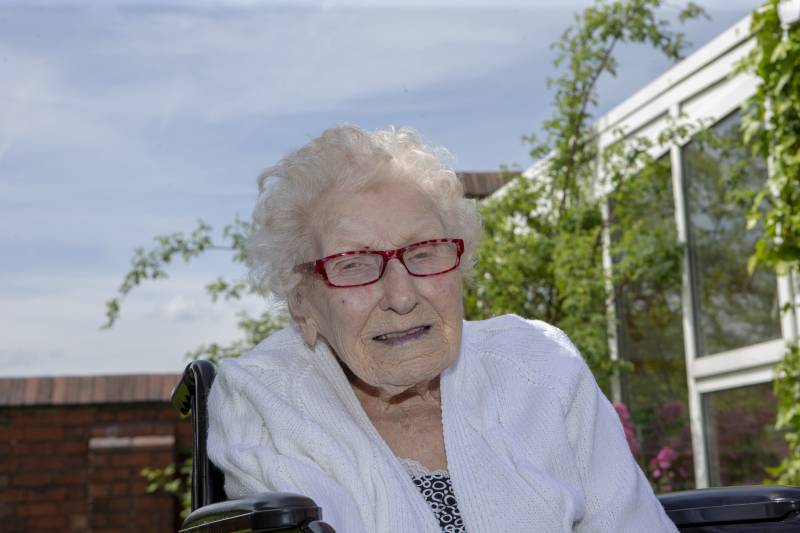 BARNSLEY’S oldest person – who credited her long life to eating well and behaving herself – has died aged 110.

Margaret Hammond, who was born on Wombwell High Street on May 25, 1912 – was the sixth oldest person in the UK when she died on December 19.

Having lived through two world wars and 28 Prime Ministers, Margaret lived a full life and remained active well past her 100th birthday.

She worked as a waitress in a restaurant on Market Street in the town centre and married Noel Leslie Hammond in 1936 with whom she had four children – Bill, Bob, Maggie and Lynda.

Lynda, her youngest daughter, told the Chronicle: “My mum lived in Barnsley up until she was 101 and a lot of people knew her.

“She was born in Wombwell and then moved to the town centre when she married my dad who used to sing in clubs.

“They then moved to Pogmoor in 1967 and lived their for quite a whole.

“When she was 101 she was having difficulties getting up the stairs so we found her a ground floor flat which was closer to me in Wakefield.

“When she turned 105 she moved in to a care home in Normanton.

“She was definitely one of the favourites there.”

Margaret had a number of jobs, including working at a restaurant and shop – and is probably best known to locals for her travels to Barnsley Market where she met a number of people, though Lynda admits many will have died since.

She’s had a number of parties to celebrate her life in recent years, and didn’t let the pandemic slow her down.

“To be so coherent at her age – and to not have dementia or Alzheimer’s – was amazing,” she added.

“She was always good for a laugh.

“She was really bright and definitely had good standards.

“Even during the pandemic when we couldn’t see her she understood the video calls really well.”

Margaret enjoyed going to the local pub to have half a lager and would often drink ‘a bit of brandy’.

She took a turn shortly after her 110th birthday, and basically lived in her bed for the last few months of her life.

“She tells everyone that she met Mr Morrison,” Lynda added.

Her favourite memory was meeting the former chairman of Morrisons supermarket, Sir Kenneth Morrison, when she was 100.

“She said to him that she has always eaten well, always worked hard and always behaved herself which I think she credits to living a long life.