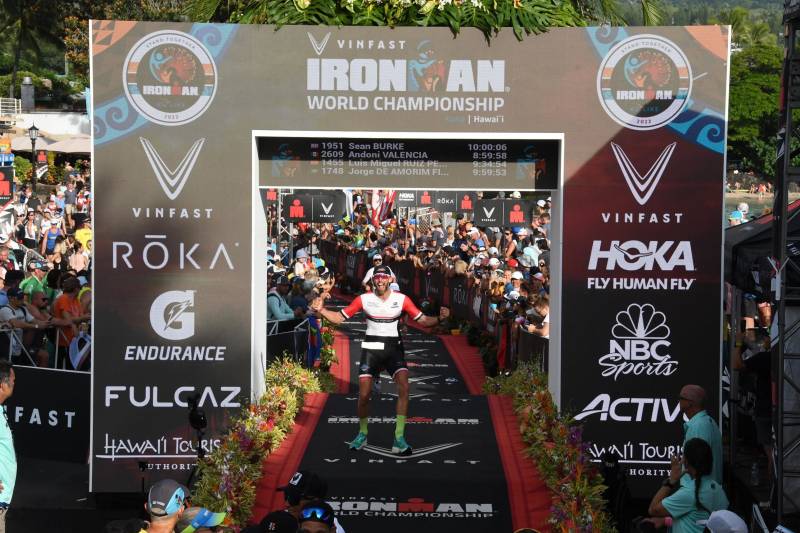 A CUDWORTH man has achieved his ultimate sporting goal – by competing in one of the world’s largest triathlons in Hawaii.

Last month, Sean Burke – along with his family – arrived on the island for his long-awaited opportunity to take part in the Ironman World Championships.

Sean completed a 2.5-mile swim, a 112-mile bike ride and then ran a marathon.

The 37-year-old has previously competed in various races around the world, including the Irish Iron Man – where he was delighted to get up on to the podium – and Bolton’s 140.6-mile course.

Sean said: “It was the hardest thing I’ve done – I didn’t quite know what to expect – but the heat is something I didn’t expect at all.

“I turned around when I got in the sea and all I could see was thousands of people on the shoreline.

“The American national anthem was playing and it was a very special moment – I nearly cried.”

This time he came 616th out of the 2,392 people in his age group, finishing six seconds over his goal of ten hours.

Following his triathlon, Sean and his family travelled to Maui and spent a week on holiday to wind down from his efforts.

Between shifts at Ardagh Glass in Monk Bretton, he goes swimming in Manvers Lake and cycles and runs around the borough.

His mum, Anne, added: “Sean carried his four-year-old son, Quinn, on his shoulders for 20 minutes to the accommodation after the race, too.

“I think at that point he was just running on adrenaline.

“We’re just so proud of him – he even stopped to kiss his family over the barriers during the race.”