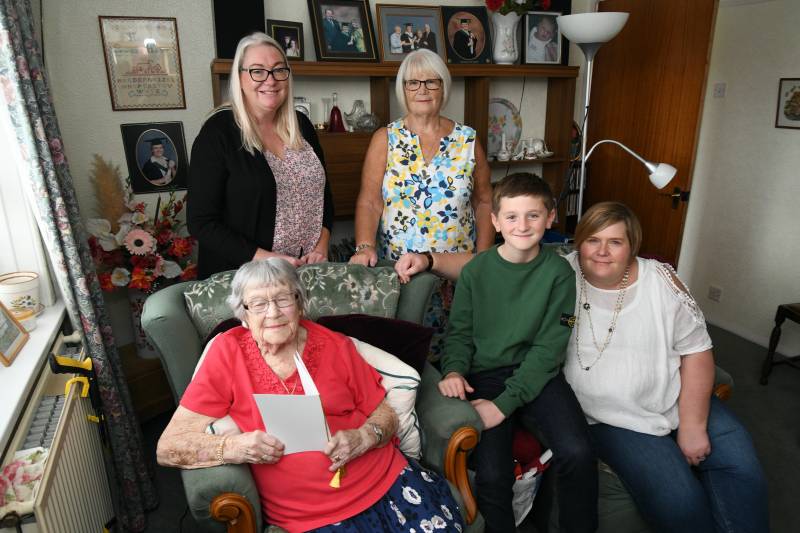 BESSIE Trout has lived in Wombwell all her life and that’s where she celebrated her 100th birthday last Saturday.

Family and friends gathered to mark Bessie’s special day with balloons, cake and ‘a bit of fizz’.

Daughter Ann said: “Mum has lived in Wombwell all her life she was born on Milton Street in The Croft, before moving to the Old Homestead and then, 72 years ago, to Burrows Grove where she still lives independently today.

“She is quite frail these days but we, jokingly, put her long and healthy life down to her having bread and dripping for breakfast every day which she still has now.”

Bessie was married to Jack for 63 years before his death in 2005 and she worked in the steelworks during World War II, receiving a Woman of Steel medal in 2016 at a reception in Sheffield for the part she played in the wartime effort.

Bessie had several other jobs before and after the war including working at the glassworks and at a local fish and chip shop.

She also used to enjoy camping holidays abroad with family and friends.

Helping her celebrate were her only daughter Ann, granddaughters Michelle and Danielle and great-grandson Cian.

“We all had a lovely day – gran was thrilled as she did receive a card from King Charles,” said Michelle.

“She was smiling all day about it.”