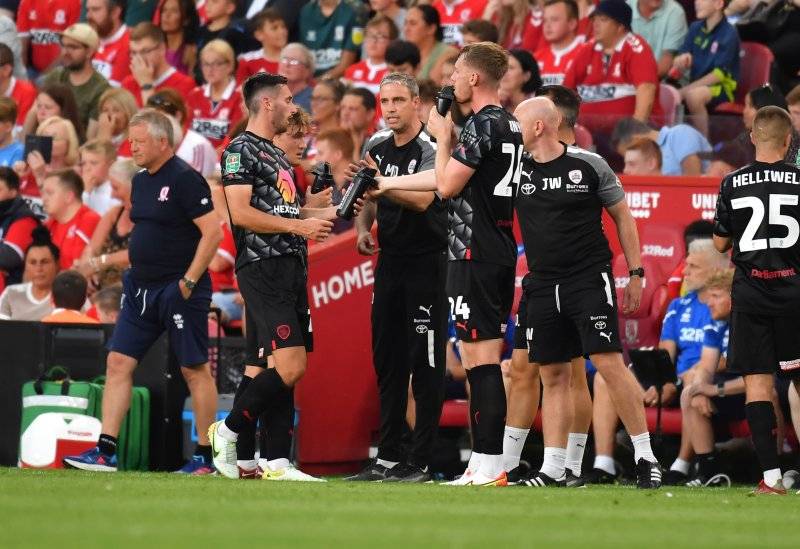 MICHAEL Duff admits Barnsley’s search for new players may go down to the final hours of the transfer window.

There are 19 days remaining in the window which closes at the end of August.

The Reds – who got their first league win of the season in their second game at home to Cheltenham Town on Saturday – are hoping to bring in one or two more strikers, as well as potentially a right wing-back and central midfielder.

There were not thought to be any deals close as of yesterday.

Duff told the Chronicle: “We played Plymouth last week and Schuey (Plymouth boss Steven Schumacher) came out after and said he has made all his signings. I would love to be in that situation, but we’re not.

“If it has to go to the last hour, it has to. We don’t want that but you can’t plot out a perfect scenario in football.

“We’re looking at players in every position but I’ve said we need more strikers.”

Duff has been clear that he wants one, possibly two, new frontmen.

Asked what kind of player they might be, he said: “They have to tick a lot of boxes. With respect, we’re in League One so are we going to get a six foot three striker who can run in behind, hold it up, fit into our wage structure, right age, good character? No.

“That player wouldn’t be in League One. But you want the ones who tick the most of those boxes, basically. The most important boxes are probably financial.”

Duff said that, as far as he was aware, there had been no more bids for Michal Helik and Callum Styles who have been expected to join Cauley Woodrow, Carlton Morris and Callum Brittain in being sold this summer.

So far the Reds are thought to have clawed back, in transfer fees and reducing wages, about half of the £7-8million shortfall from relegation to League One last season.

On Styles and Helik, he said: “I am having dialogues with them all the time. They are aware of the situation.

“Mich is injured and Stylesy has been playing – he’s got his head around the fact he’s a Barnsley player and expected to perform and I think he is performing.”

What plans are in place to replace anyone who is sold?

“There are lists, constantly.

“It’s slightly different here because I am not in total control which is fine and I knew it before I came in. It’s going out of the game where a manager picks all his players, fails and the club has to start all over again. I am part of it but it’s not ‘I want him, let’s go and get him.’ But I knew that before I walked in the door.”

Duff says he will be relieved when the window is closed and he knows his squad until at least January.

“There are lots of moving parts when teams get relegated. Sometimes players are delusional in terms of where they think they are at. People have to take wagecuts which upsets them.

“There is a lot of noise at this time of the season at every club. Once the window shuts, it will settle down a bit.

Towards the end of the window, Barnsley are expected to either loan out or sell players not in Duff’s plans.

The head coach said last week that Aaron Leya Iseka was fully fit and available, but he would select a squad based on training performances, then did not include the Belgian on Saturday.

The striker – who came on late in the EFL Cup on Wednesday night at Middlesbrough – is one of the players expected to leave this window, if the Reds can find a club to take him.

“The players know what they need to do. I don’t want to get obsessed with one player because it’s not fair.

“He (Iseka) wasn’t the only player who was left out (on Saturday). The squad speaks for itself, but he has the same opportunity as everyone else.