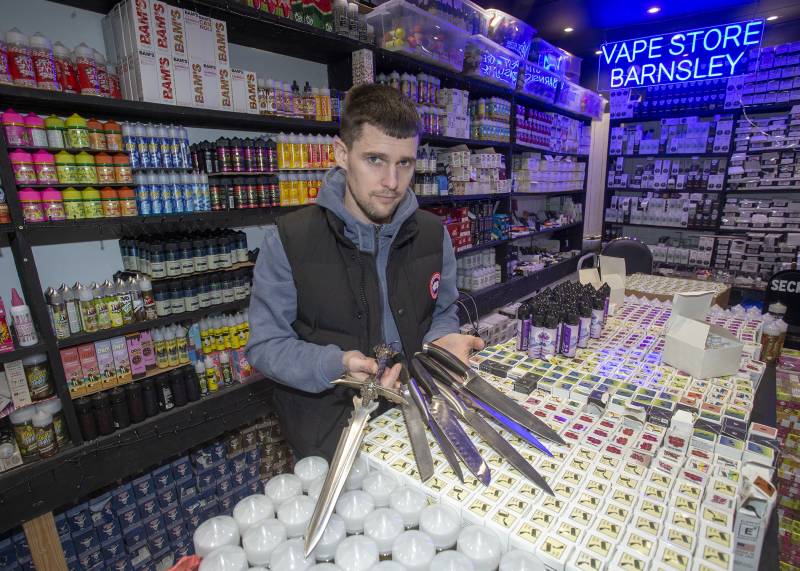 A TOWN centre businessman who has taken hundreds of knives off the street through his amnesty bin has been nominated for a Proud of Barnsley award.

Mitchell Cavill is the owner of Vape Store and Bargains Galore on Regent Street South and for the last three years has had a weapons amnesty bin inside his shop.

A number of people would occasionally drop off knives inside to Mitchell but since the arrival of his new bin – delivered to him by campaigner and author Ant Olaseinde, who strives to stop knife crime – he has seen blades longer than ten inches, as well as butchers’ cleavers and serrated knives.

The amnesty bin has been situated outside his shop for a number of months, and Mitchell believes he’s had around 200 knives in total.

“It’s all about getting some knives off of the streets and the police are getting on board with it as well now.

“We’ve got about 200 knives so far – it has slowed down a bit but we were getting around five to ten every week.

“I never expected it to go as well as it has done – even if we managed to get just one knife then it would have done its job.”

Upon hearing of his nomination in the Community Hero category, Mitchell added: “It’s brilliant – it’s really surprised me.

“It’s nice to see people are still taking notice of it and it’s good that it’s got people talking.”