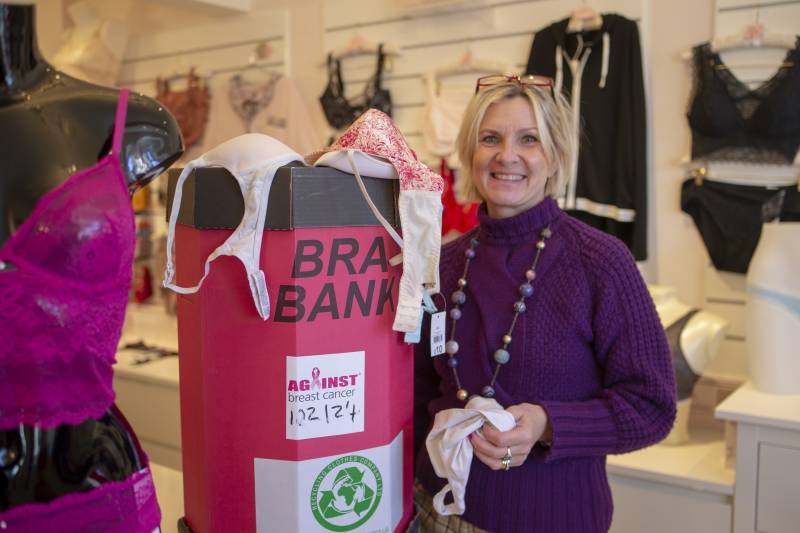 A ‘BRA bank’ in a Penistone lingerie shop has garnered thousands of donations of second-hand items as part of an initiative to raise funds for breast cancer research.

The owner of Frillies Boutique, on Bridge Street, said she has never struggled to fill her bra bank containers at the shop and donates hundreds of used bras every few months to breast cancer research charity Against Breast Cancer’s bra recycling initiative.

Rebecca Barnett has had the shop for around five years and has hosted the bra bank, which is made up of three containers with a capacity of 400 bras each, from the outset.

“The bank is open all year round and at the moment I have around 800 bras in the shop all ready to be donated,” she said.

“I give around 1,200 every time I donate, which varies, but is roughly every few months.

“Customers tend to just pop in and donate them or when they come in to buy a new bra, sometimes they’ll even donate the old one they walked in wearing.

“More and more people seem to be doing it as I think they’re getting more conscious of the environment and recycling, so it’s great to see really.”

Against Breast Cancer receive £700 for every ton of bras donated and any that are no longer useable are dismantled and recycled.

While others are given to recycling partners to be given a ‘new lease of life’ in countries such as Togo, Ghana and Kenya – where bras widely remain too expensive to produce locally.