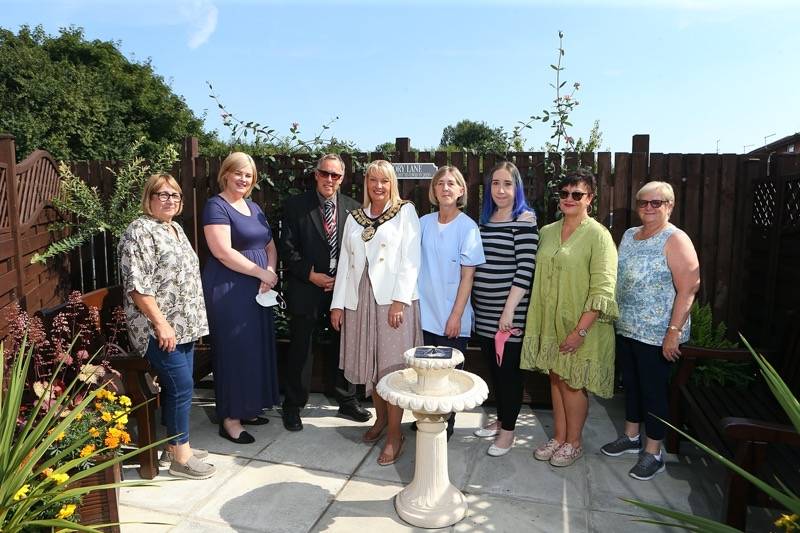 A MEMORIAL garden has been opened as a poignant reminder of the effects of the pandemic on care home residents, relatives and staff.

The memorial garden at Valley Park Care Home in Wombwell was officially opened by Mayor Caroline Makinson on Wednesday afternoon in the beaming sunshine.

“I got quite emotional,” Coun Makinson said.

“I think when you’re at places like this where there has been so much loss, it hits home.

“It just really hit home being there – I do feel humbled to have been a part of it.”

Carer Carol Turner – the main organiser – said she and the home’s staff wanted to give something back to the community that’s supported them through the last 18 months.

“It’s been such a bad time with nobody allowed into the home,” said Carol.

“We’ve had a lot of support from the community and the care provider.

“When people have passed, we still support families – a lot have wakes here – but there was nothing, no closure.

“We wanted to create the garden so that any time people want to come and sit in the garden they can, to let them know how important they are and that their relatives won’t be forgotten.”

Steve, 59, and Barbara Whittingham, 54, were also thanked at the opening for their support and fundraising efforts, and were presented with a bouquet.

The Whittinghams run Facebook page Wombwell Wise and raised around £980 all together to help fund the memorial garden, which is a tranquil fenced area of the garden featuring seating, decoration and a water feature.

“It’s nice to see the community has pulled together to remember people.

“Having everyone together to celebrate this is really special after so long being apart.”