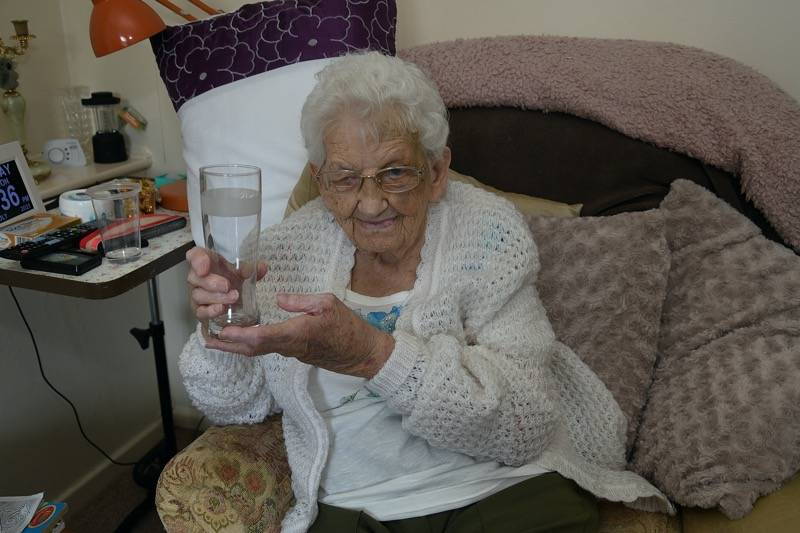 VIOLET Shepherd certainly showed her mettle as a wartime ‘woman of steel’.

And she is doing the same again as she celebrated her 100th birthday on Friday.

A card from the Queen and a big party on Saturday will mark the occasion for the woman who has lived in Thurgoland for nearly 60 years.

But Violet said: “I am not bothered about being 100, but I did want something for my daughter, Rita.

“I have not wasted my life – I have been a hard worker and helped out with anything I could during the war as part of the St John Ambulance.

“I can’t grumble about what I have done and the places I have been to.

One of 12 children and the last one to survive, Violet’s family came from Hull to Cawthorne during the First World War, later settling in Denby Dale where she worked in mills from the age of 14 and became a member of St John Ambulance.

Eventually, Violet went to stay with her sister in Stocksbridge and from there to work in the steel mills during the second war.

She would cycle back to Denby Dale every week to hand over her wages to her parents.

She and her colleagues in other steel mills became known as the ‘women of steel’ for keeping the industry going while men were away at war.

In 2010, she was one of those to receive a medal and certificate from Sheffield City Council as thanks for that work.

On marrying George Shepherd, Violet moved to Crane Moor and then on to Thurgoland where she has lived for 58 years.

Locally, she worked as a nanny for the Earl of Wharncliffe in Wortley.

Rita, who also lives in Thurgoland, added: “Mum has always been a quiet, reserved person who has kept herself to herself.

“As well as a celebration, the party will also be a great chance for friends and family to finally meet after lockdown and not seeing each other for such a long time.”