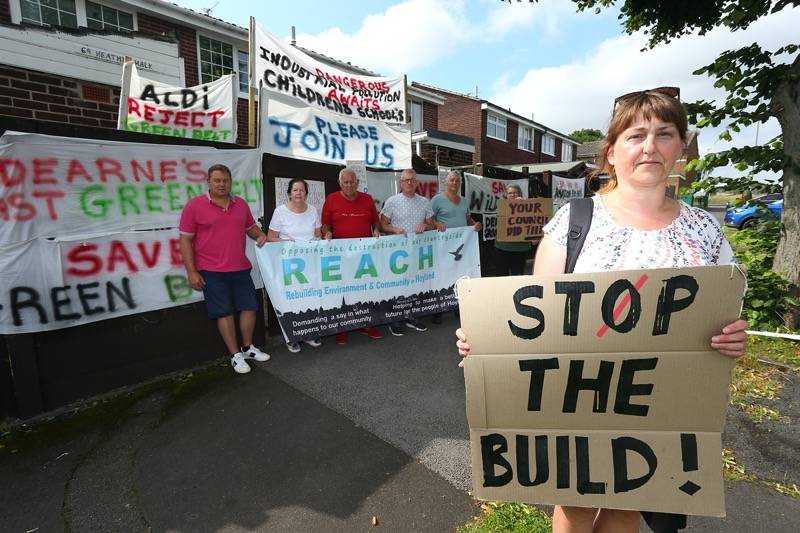 Protesters against the Goldthorpe site

PLANS to allocate former green belt for employment use have been met with disdain from local residents.

A consultation period for the Goldthorpe masterplan framework, on a site dubbed ES10 in Barnsley Council’s local plan development blueprint to the south of the Dearne Valley Parkway – was undertaken in January.

Locals, who are part of the Dearne Residents Action Group, have hit out against the plans – which will see a 72.9-hectare site used for ‘essential’ employment use.

The site was formerly allocated as green belt but was released for use as part of the local plan process.

It was previously subject to opencast mining, and sits near to flood zones in both category two and category three the most severe risk of flooding given it’s crossed by Carr Dike.

Development, according to council documents, will be in line with Barnsley’s zero carbon ambitions by promoting reduction of greenhouse gases, encouraging sustainable transport and enhancing the biodiversity of the existing site.

But Julie Rodgers, of Bolton-upon-Dearne, believes that the pollution that will come along with the development could cause ‘chronic conditions’ – and feels that residents’ views are being ‘completely ignored’.

She said: “Since the development of the huge Aldi distribution centre at Goldthorpe Industrial Estate, I have witnessed a significant increase in traffic and HGVs on this road.

“At certain times of the day you cannot move on this road for traffic – mainly at school opening and closing times as there is also Carr Field School on this road.

“I’m shocked and utterly disgusted that this development has been passed.

“There has been no risk assessment or public health assessment done for the people of Bolton-upon-Dearne.

“When you consider what it says on the government’s own website regarding air pollution and the effects it has on public health from busy main roads, then this is completely unacceptable.

“The two Schools that are right next to the development, Heather Garth and Lacewood, are both less than 0.2 miles away from where hundreds of HGVs will be going daily, which puts their health at risk from pollution – it’s totally shocking.”

A petition against the development has also garnered almost 500 signatures – and it’s also gained interest from other campaign groups across the borough who want to protect green spaces in Barnsley.

Pete Deakin, from the Barnsley for Democracy campaign, visited the site earlier this week and said: “Seeing all of this beautiful countryside being taken away from the residents of Bolton-on-Dearne, for it to become a giant block of concrete and steel in order to serve a super rich, multi-national company, is devastating for all.

“This is part of the relentless Barnsley masterplan set to destroy the green spaces of Barnsley, forever, with no involvement from the public.”

Steve Bacon, a member of the REACH campaign, added: “We want to support the Dearne campaign as it is clear that both areas are suffering because of the terrible and destructive decisions made by the council, without talking to anyone.

“They only seem to care about Amazon and not about the people of Bolton-on-Dearne.”