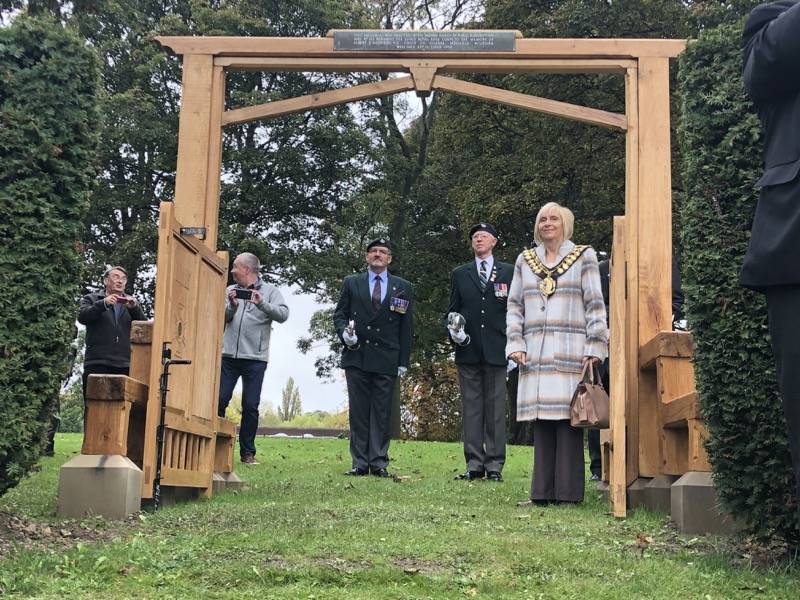 A MEMORIAL gate dedicated to the only Barnsley man to ever receive a Victoria Cross for his act of bravery in the First World War more than 100 years ago has been extended.

Albert Edward Shepherd was enlisted in the army aged 17, and took part in the Battle of the Somme in 1916 and the Battle of Passchendaele in 1917.

The gate – which is in place at Royston St John’s Church – has had a second panel installed featuring a carving of Albert’s regiment badge by craftsman John Niland.

Coun Caroline Makinson said: “Albert is remembered with affection by the people of Royston who in 1966, through public subscription, erected a gate in remembrance of the man and his heroism.

“The original gate suffered over the years and in 2019 the Royston Ward Alliance supported a replacement with the help of The Community Workshop in Cudworth and its volunteers, led by John Niland.

“The gate is constructed in green oak and situated within the grounds of the church and features panels with a carving of a Victoria Cross which he was awarded for his heroism in the First World War.

“Recently a second panel has been installed featuring a carving by John of Albert’s regiment badge, The Rifles.

“The structure and the gates together with the carved panels stand majestically behind the war memorial.”

On November 20, 1917, at Villers Plouich, his company was held up by a machine gun at point-blank range.

Private Shepherd volunteered to rush the gun and although ordered not to, ran forward and threw a Mills bomb killing two gunners and capturing the gun.

The company, continuing its advance, came under heavy fire again, this time firing across the line of advance.

When the last officer and NCO had become casualties, Private Shepherd took command of the company and ordered the men to lie down. He then went back some 70 yards to get the help of a tank which was used to give cover to their advance.

His heroics were published in the London Gazette and he was awarded the Victoria Cross, the highest award for gallantry in the face of the enemy.

The medal now rests at the Royal Green Jackets museum in Winchester.

Beverley Oakley, Albert’s granddaughter, added: “We are very proud of our grandad for what he achieved and he will be commended for ever more.

“This memorial is wonderful.”