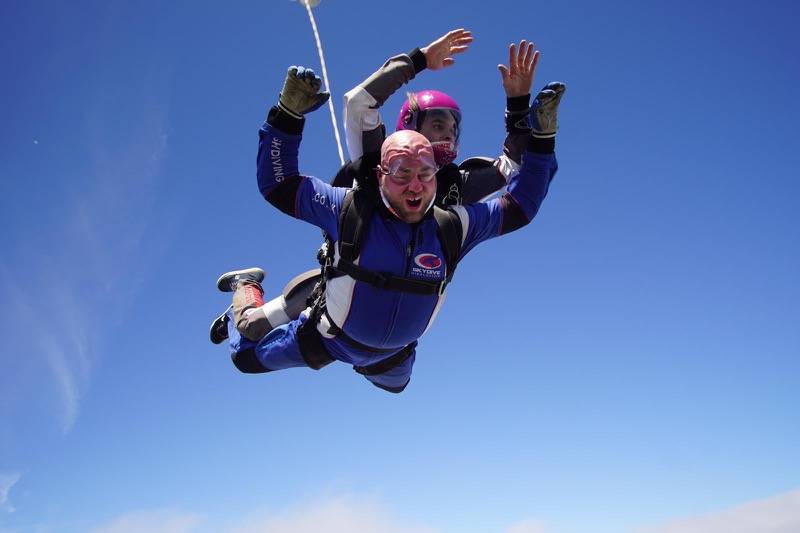 A CARING uncle flung himself 15,000 feet out of a plane – all in the name of raising vital funds for his nephew’s life-saving cancer treatment.

Grant Hall, of Salter’s Brook, Cudworth, took to the skies above Hibaldstow, Lincolnshire, last Saturday and raised about £800 for Oliver Stephenson’s ongoing fundraising appeal which has so far generated more than £250,000 since being launched earlier this year.

The four-year-old was diagnosed with high-risk neuroblastoma in January and, although the cancer spread from his kidney to his bone marrow, skull and eye sockets, the youngster’s story inspired an ardent following of well-wishers.

The innovative ‘bivalent’ vaccine, which will come after Oliver’s chemotherapy has run its course, has been proven to give kids a much higher survival rate and decrease the chances of cancer returning in following years and it’s this that his family want to pursue in the USA.

Railway worker Grant, 33, was joined by Oliver’s dad, James, on the skydive which had been delayed due to the coronavirus pandemic.

“It was a brilliant day and one of the best experiences of my life,” Grant said. “Words can’t describe what it’s like when you’re up there but it was for such a worthwhile cause.

“The weather was decent, which helped, and it takes about six or seven minutes to descend.

“Oliver’s family and I can’t thank sponsors enough as everything helps towards his treatment.”