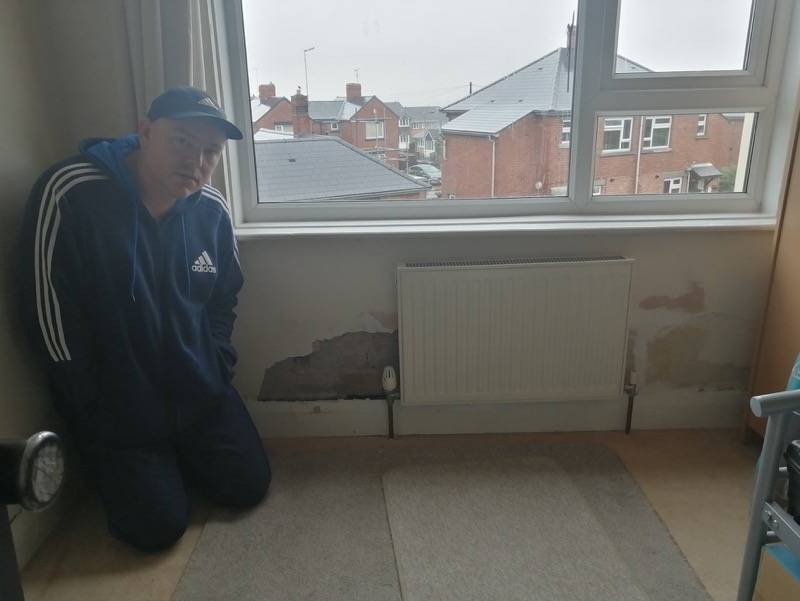 A BARNSLEY man claims he has seen both his physical and mental health deteriorate after moving into an ‘unliveable’ home with no support from Berneslai Homes.

Lee Pattle, 35, moved into his home on Gate Crescent, Dodworth, with his partner, 31-year-old Karen Carter, back in February – but the stress the house has caused Lee has seen him reach breaking point.

Upon moving to Dodworth from Thurnscoe, Lee was told by his housing officer that all the faults were in for repair – but five months later he says he is still waiting for much of his home to be fixed.

He said: “I moved into this house on February 4 and my housing officer, who has since changed, told me that all the faults were down for repair which clearly isn’t true.

“I have holes in my bedroom and there’s damp in the bathroom, an electrician came this morning to fix something in the kitchen and that’s been out for repair since we got here.

“I can’t count the amount of complaints that me and my partner have made and now it’s really starting to get ridiculous – the whole place is falling apart.”

It’s the latest setback for the council housing provider, after councillors on a scrutiny board blasted some of its homes’ standards before lockdown, prompting a raft of changes to be made to its lettings policy.

Kier, the firm responsible for carrying out the majority of Berneslai Homes’ repair work, was recently replaced by a new company – Wates – which has taken over rectifying tenants’ issues.

Lee used to suffer from asthma when he was a teenager though he hasn’t had to use his inhalers for over ten years, but since he arrived in Dodworth he has been put on a repeat prescription for both blue and brown inhalers.

“I already suffered from mental health issues but this has been driving my head insane,” he added.

“My physical health has been drained as well and I had to go to the doctors because my breathing was really bad, I did the asthma tests and my results were really bad.

“I suffered from asthma when I was younger but I stopped using my inhaler ages ago, I’m now having to use blue and brown inhalers constantly and I’ve never used the brown ones in my life.”

Lee feels that he is being ignored by Berneslai Homes but even when they do contact him and his partner, he says they tell them both ‘completely different things’.

“When I did get in touch with Berneslai Homes they told me that they could only come out and fix a hole in the wall if it was bigger than a pound coin, but they told my partner that it has to be larger than the palm of a hand,” he said.

“It’s all really confusing, I’ve had to go out and buy a plastering kit when I’ve never plastered before.

“We just want the house to be repaired that’s all.”

A spokesperson from Berneslai Homes added: “We are aware that there are some outstanding repairs at the property, some of which have been delayed because of the Covid-19 pandemic.

“We have made contact with the tenant and have arranged an inspection this week to assess the work required and agree a schedule for completion.”