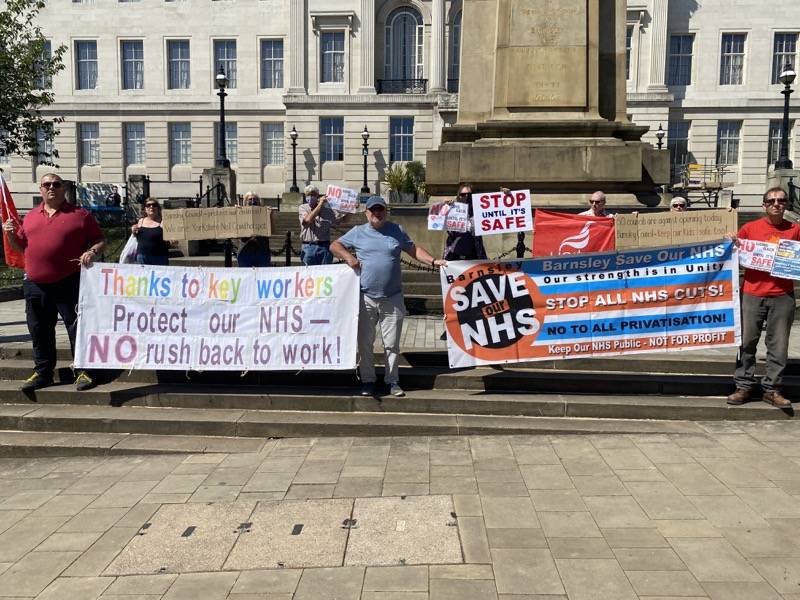 A SOCIALLY-DISTANCED protest against the reopening of schools was held on Monday outside the town hall by the Barnsley Trade Union Council.

Following advice from the government, schools were told they were able to reopen on Monday – something which sparked debate and concern not only across the borough, but across the country.

George Arthur, the secretary at BTUC, said: “We believe that June 1 was too soon for schools to open their doors back up to children.

“It was announced last week that Barnsley was the number one Covid-19 hotspot in Yorkshire, which underlies the problems that we are currently facing.

“We know lots of parents are extremely wary of sending their children back to school, so we’re here to support them so they don’t feel isolated.”

Since the announcement was made by Prime Minister Boris Johnson, a total of 60 councils have released statements saying that they are against the reopening – but Barnsley Council has not.

“There’s 60 councils that are asking that schools in their borough don’t open, so we can’t understand why our council is persistent on them opening,” he added.

“For quite a long time Barnsley Council has not been prepared to stand up against the Tory attacks on our town by blindly following the advice from Boris Johnson.

“They keep saying that they’re just following the science, but we don’t agree as the science is split.”

Mel John-Ross, executive director of children’s services, said: “These are big decisions for parents and carers, and not easy ones to make. I can reassure them that we’re meeting regularly with the Barnsley Schools Alliance Board and school leaders to do all we can to continue to provide a safe as possible environment for their children.

“We know children’s wellbeing is made better from spending time with their friends and from the social interaction and structure that school provides.

“We believe that it’s important for children to go back to their school or early years setting, to avoid lost learning and the significant impact that this may have on their future outcomes.

“Schools have completed risk assessments, and significant and detailed consideration has been given to how children can safely return.”