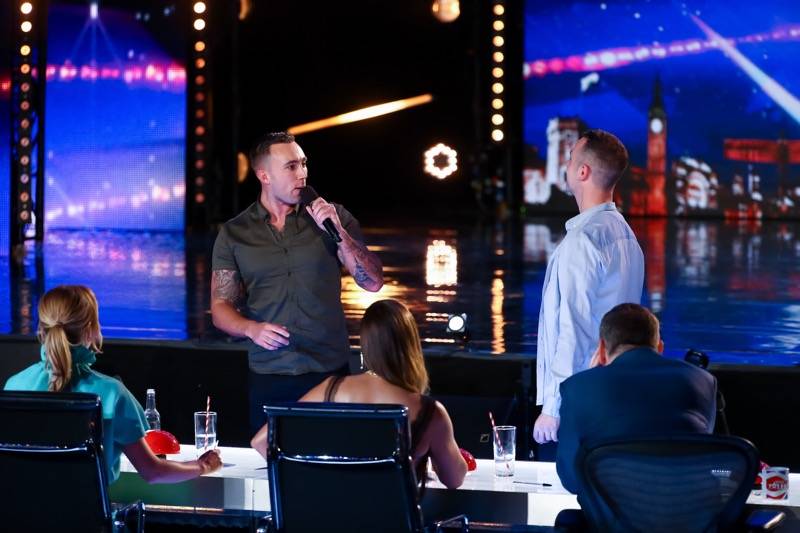 A SINGING duo – one of whom is from Penistone – took to the bright lights of Britain’s Got Talent last weekend as they eased through with all four judges giving them the green light.

Lee Day, 31, and Vince Fountain, 41, have been singing together for nearly two years as the act ‘Soldiers of Swing’ – as both are soldiers with the 37 Signal Regiment, based in Sheffield.

Lee told the Chronicle: “Vince and I have been soldiers for 14 years now and we’re both based in Sheffield on the recruiting side.

“We actually only started singing together at a social event that happened to have karaoke, and when we sang people thought we sounded really good together.

“We spent about £1,500 on musical equipment so we needed to make it back somehow which is why we started singing in care homes, and it all snowballed from there.”

The duo jokingly applied for the show last year, thinking nothing would come of it, but before long Lee and Vince were at the auditions in Manchester, which took place before the current lockdown.

“During the day it was really exciting for us to be there, obviously when we were about to go out to face the crowd we were quite nervous, but Ant and Dec helped us in that respect.

“They’re both brilliant blokes, it was nice to have a couple of down-to-earth lads there to help us, they calmed our nerves and made it feel as normal as possible. We’d actually changed our mind just before we went out there to sing ‘That’s Amore’ which was originally our back-up song – we got cold feet and thought that would be more upbeat.”

During their performance, Simon Cowell stopped the pair, signalling for the music to be halted and asked them to sing their second song ‘Luck Be a Lady’ – which ultimately saw them progress through to the next round.

“We hadn’t rehearsed it that much before and so when Simon put his hand up we thought we’d definitely got it wrong,” said Lee.

Lee and Vince are yet to find out what will happen in the future rounds as, due to the coronavirus pandemic, filming for the show has stopped.