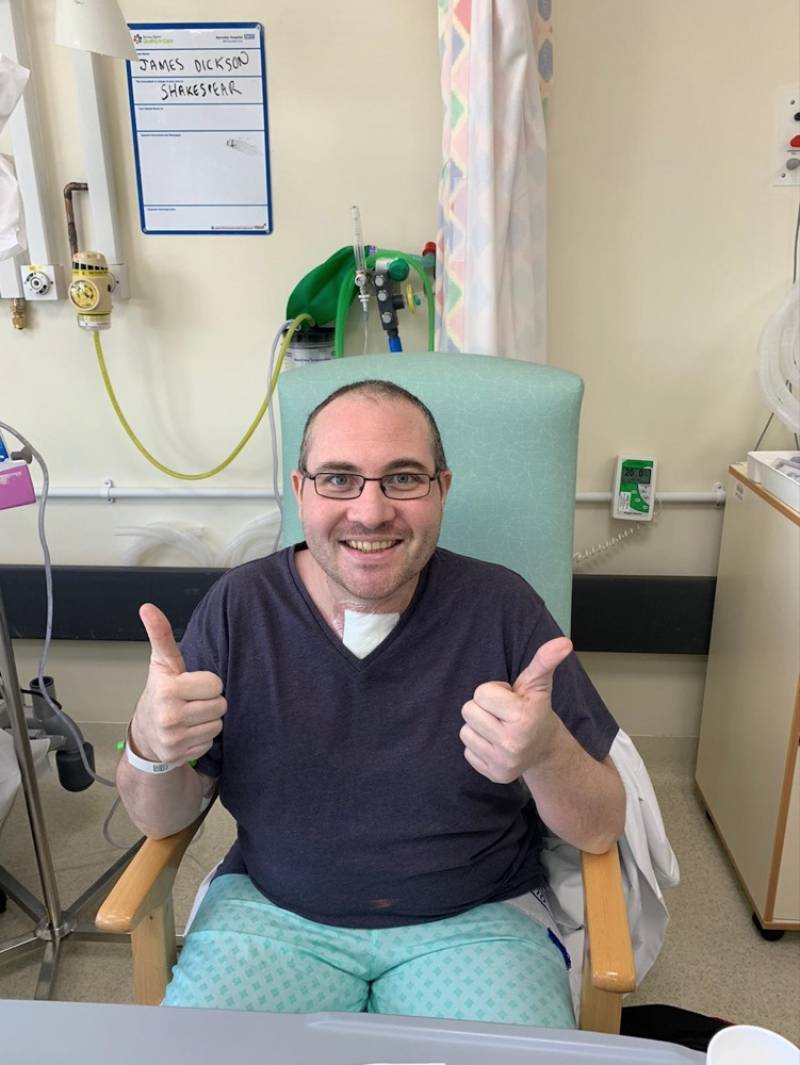 James, 39, was the first confirmed Covid-19 patient in Barnsley and spent 31 days in hospital 14 of them on a ventilator in intensive care squaring up to a touch-and-go fight for his life.

It was a fight James and his family feared he might lose on more than one occasion, with doctors admitting he had no more than a 50-50 chance of survival.

This week, speaking exclusively to the Chronicle, a grateful James said: “The staff in the hospital and ICU in particular are nothing short of super heroes.

“I can’t stress enough my appreciation for what they did for me.

“No words can do justice to the work everyone there is doing, they’re like soldiers going into battle.”

James, of Monk Bretton, started feeling unwell with a high temperature and shivers but put off seeking medical help because he says he ‘didn’t want to be a burden on the NHS’.

“I just thought I could get over it by self-isolating, taking paracetamol and resting and I really didn’t want to cause a fuss.”

But over the next five days, his condition deteriorated dramatically as he struggled to breathe and his temperature continued to soar to 40 degrees.

“Then on St Patrick’s Day night, I was in bed, shivvering but with a really high temperature and my wife said something had to be done.

“After speaking to 111, she called an ambulance and when it came, the paramedics were wearing full PPE equipment.

“Seeing them walk into the bedroom dressed in that gear hit me and made me realise just how ill I really was.”

Once in hospital, his condition continued to deteriorate and after two days, he ended up the intensive care unit before being put into an induced coma so he could be placed on a ventilator.

Moments before he was induced into the coma, staff phoned James’ wife who was self-isolating with their two boys, so they could communicate via video chat.

“I was very scared to go on the ventilator.

“You have no time to prepare for it so I did have a bit of a meltdown but I knew the staff were determined to try their hardest to get me through.”

James hovered between life and death for the next 26 days, needing a tracheostomy where an opening is created at the front of the neck so a tube can be inserted into the windpipe to aid breathing to help bring him round.

“Because of the personal protective equipment everyone was wearing, I didn’t know the face of a single person who looked after me but I got to know them through their name badges, height and shape,” added James.

Every day, the ICU team of doctors, nurses, physios, dieticians and pharmacists worked tirelessly to help his lungs and body recover.

When James finally regained consciousness, he was able to speak with his wife on FaceTime something that he is extremely grateful for.

“Just being able to hear her voice and see her through the phone was extremely comforting for me.

“At that point I wasn’t really able to talk so she was having to lip read and ask yes and no questions but it was amazing to see her.

“I usually have a shaved head but when I woke up my hair was long for me anyway and I had a thick ginger beard and long nails.

“Staff were able to give me a bed bath which was amazing. Being clean and having tubes disconnected made me feel human.

“The staff’s compassion and dignity doing this personal care was incredible.

“I took 20 minutes brushing my teeth after, it felt so great.”

Dr Steve Lobaz, consultant in anaesthetics and intensive care medicine, believes James would have died had he not gone into hospital when he did.

He said: “James is the same age as me, has two kids like me, making this even more personal to see him in this situation.

“Knowing that there was a high chance of him dying he was at least 50-50 even with intensive care due to the severity of the disease raised emotions high.”

James, a self-employed media freelancer, was finally discharged from hospital with a round of applause and a ‘guard of honour’ on Friday.

Now at home, James, who lost a stone in weight, said: “I was relieved to get through it but it was an odd feeling I’m certain it’s not hit me yet.

“As soon as I got home I gave my boys a hug and got a glass of water.

“I’m still wobbly on my feet and my legs feel like jelly which is a shock when I was previously so fit and well. I’ve lost a lot of muscle and over a stone in weight.

“I’m doing exercises every day and every day my walking and balance gets a bit better.

“My appetite is good and the tracheostomy is ok I had to start swallowing gradually just taking teaspoons of water. My first real food was ice-cream, then yoghurt and mashed potato with gravy.

“One thing I want to say is that this is a new illness that doctors and nurses are trying to deal with on a day to day basis.

“Staff are coming in every day and basically stepping into darkness.

“I’d do absolutely anything to help repay them for saving my life. Because that is exactly what they did.

“But my story shows that recovery from coronavirus is possible.”