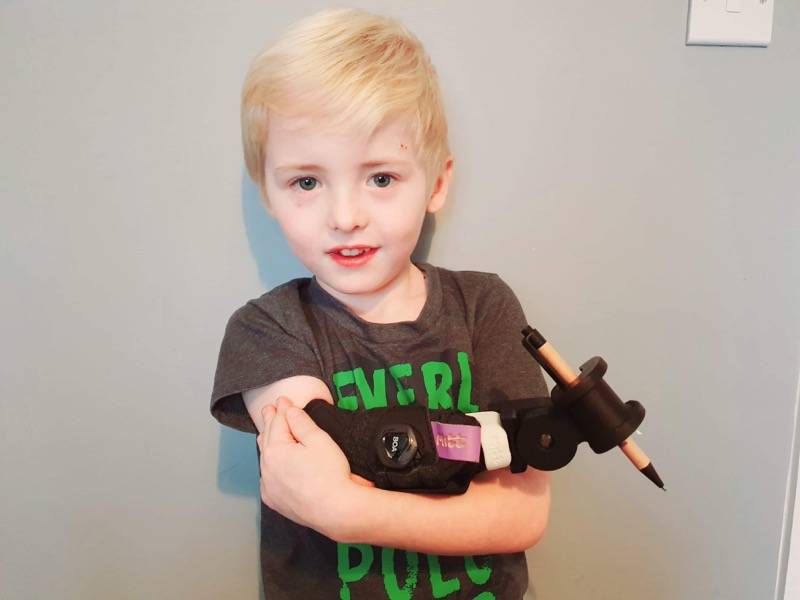 A CHARITY which provides artificial limbs for children has secured funding for ten revolutionary products which can help kids complete daily tasks with ease.

The LimbBo Foundation was created by Adam and Katie Dengel after their son, Tommy, now five, was born missing his right forearm due to a rare condition – amniotic band syndrome – which is caused when stray bands of tissue wrap around limbs in the womb and cut off blood flow.

The pair created the charity in 2018 and began making 3D printed, specially-adapted limbs for children from their Royston garage.

The 3D limbs are customised to each child and come in a variety of themes to reflect the child’s interests such as Captain America, Wonder Woman and Buzz Lightyear.

Now, Adam and Katie have secured funding for ten artificial limbs from prosthesis firm Mitt, which allow children to hold items such as pens and cutlery with ease.

“They are really wearable,” said Adam, 31,of Shepherd Way. “Where most other prosthetics are made from plastic, these are made almost entirely from fabric which make them a lot more comfortable to wear.

“They have a magnetic bit on the end which allows for an attachment that can hold a pen, knife or fork, toothbrush, and even a tennis racket. There’s no limit to what that child can do while wearing one of these artificial limbs which is why we felt that it was a worthy cause to invest in.”

To help families across the globe to have access to the Mitt limbs, the charity fundraised £5,000 which was then matchfunded by an anonymous donor which allowed the purchase.

“The children get two arms as part of the package,” Adam added. “They will get one at the start of the year, then another towards the end of the year when they have grown.

“They really go a long way to helping the child to gain independence because they can do things with them that other prosthetics won’t allow.

“Tommy loves his. Before he couldn’t cut up his own food but now he takes his to school so he can cut up his own meal and draw and paint like other children.

“They can also take the artificial limb on and off by themselves which is really great.”

The ten Mitt limbs will be sent across the globe to children and families in need.

“We will be sending a Mitt to America and we also have customers in Australia, Canada, and South Africa – it’s really crazy to think that the idea we had two years ago in our kitchen has turned into this.

“Losing a limb is difficult in many aspects but these artificial limbs make it a lot easier and we are just happy we can help in any way.”