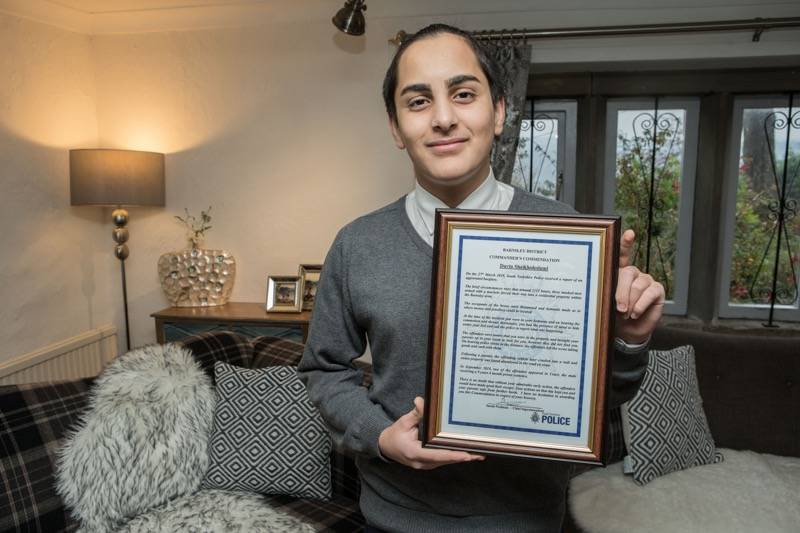 A TEENAGE boy who was commended for his ‘admirable’ bravery after armed thugs broke into his family home has been nominated for a Young Champions award.

Davin Sheikholeslami, 14, was at home with his parents on Kingwell Road, Worsbrough, when three masked men broke in armed with knives and a machete in March last year.

They forced his parents upstairs and began searching the home for valuables while also trying to find Davin, 14, who they knew was in the house.

Davin had heard the commotion and hid under his bed, out of sight of the intruders.

Using his phone, Davin managed to alert the police to what was happening and averted a potential tragedy.

His mum, Fazeh, said at the time that the police heard everything on the phone and sent a helicopter, police dogs and cars to the house.

Once the police arrived, the thieves attempted to escape but were caught soon after, and the ordeal was over after 15 minutes.

Gabor Voros, 41, of Red Laithes Lane, Dewsbury, was sentenced to nine years and four months imprisonment at Sheffield Crown Court while another defendant was found not guilty.

Following this, Davin was awarded a certificate of bravery by the police and his commendable act has also earned him a Young Champions nomination.

Fazeh said: “It’s great that he has again been recognised for his bravery.

“As a family we all went through a really bad time and Davin experienced a lot of stress and anxiety following the incident.

“He has come a long way especially since he was awarded by the police as he now feels proud to have done what he did whereas before he didn’t feel brave at all.

“Davin did a good thing and he deserves this recognition.”