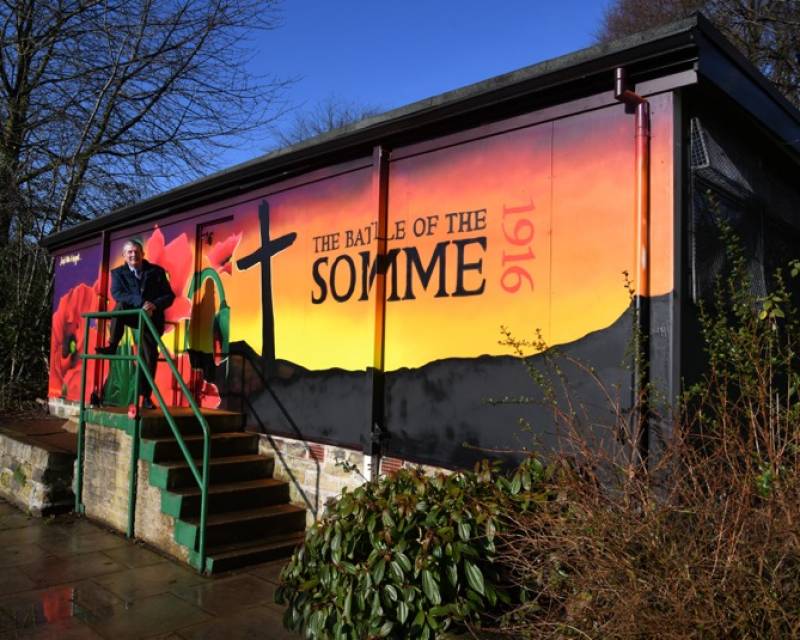 VANDALS whose behaviour reduced war veterans to tears when they targeted a poignant war memorial have been told to stay away from a park after the shrine was refurbished.

The goings-on at Cudworth Park – a long-running policing priority due to antisocial behaviour – saw thugs damage its Battle of the Somme memorial last June.

It was created to remember the 41 Barnsley Pals from the village who died in battle serving the 13th and 14th Battalions of the York and Lancaster regiment.

The Somme memorial takes centre stage in a ‘peace garden’ which was formerly the park’s bowling green and was created by artists who painted striking murals on a cabin.

Following a public outcry after the damage, Cudworth Environment Group, chaired by Coun Charlie Wraith, footed the bill for the repair works – estimated to be about £1,500 – and the restored memorial was unveiled this week.

“Cudworth Park has endured so much criminal damage but we had to act on this as they targeted a war memorial, beautifully created to remember local soldiers, the ones who gave up their lives so these idiots could enjoy their freedom,” Coun Wraith told the Chronicle.

“People were moved to tears by the damage – it was so upsetting to see veterans like that. It’s important that we didn’t let those responsible win and we’re now appealing to the police to give the area the protection it deserves to avoid a repeat.”

A warning has been repeated from Barnsley Council as a result of continued vandalism at its parks – which has cost more than £100,000 to put right since 2015 – that damaged equipment may not be replaced, leaving communities to rely on local groups for funding.

Cudworth, despite having its Manor Road police station re-opened and a team of officers put in place to cover the village and the neighbouring North East ward, has continued to be blighted by criminal damage cases allegedly involving youths.

However, Coun Wraith hopes last week’s announcement that more officers – who have the power of arrest – are on their way to local teams including Cudworth’s will result in less cases.

“We’ve been saying for a long time that the only way to solve this problem, one that’s blighted communities across Barnsley for too long, is to have more police patrolling known antisocial behaviour hotspots,” he added.

“If they’re in place, yobs will be left with no choice but to change their behaviour or face the consequences.”

Police, although they did not instate Cudworth Park as their top priority for the coming weeks at the village’s last crime meeting earlier this month, vowed to continue their evening patrols.

PC Clare Sidaway called for funding to be provided for CCTV to be placed in the park – a move police believe will reduce residents’ concerns and crime rates.

“Unless officers see anything untoward while we’re at the park, it’s incredibly difficult to identify anyone without having CCTV recording its goings-on,” she said.

“We need to look towards achieving that, hopefully with the help of the council.

“We’ve spent a lot of time in the park and its two car parks but this will remain on our to-do list as it’s clearly very much an ongoing problem area.”