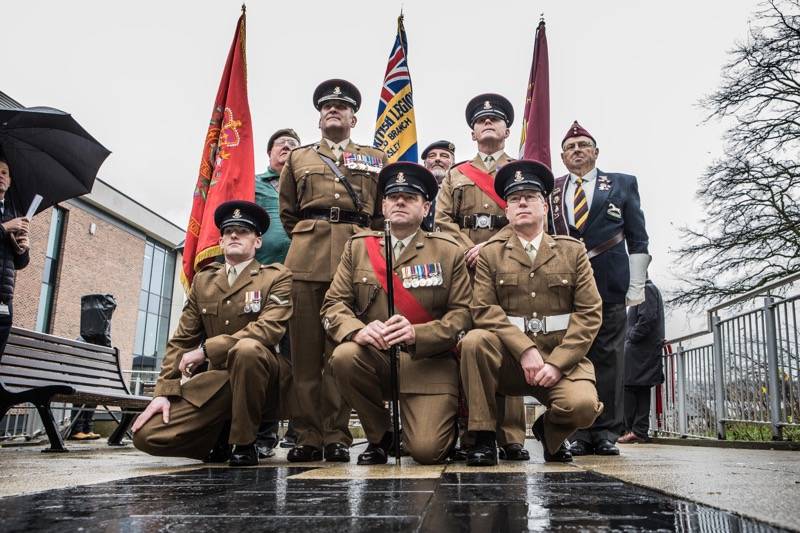 A WALKWAY commemorating those who have served or are currently serving in the HM Armed Forces was officially unveiled during a ceremony in Barnsley this week.

The HM Armed Forces Commemorative Walkway is the first to be launched in Yorkshire, and is situated on Westgate, behind the Barnsley Sixth Form College gardens.

It has been has been created for families and friends to remember those who have and are currently serving and the space has been provided in partnership with Barnsley College.

During the ceremony on Wednesday, standard bearers and relatives of those named on the first stones laid were among those invited to the ceremony, which was led by the Mayor of Barnsley, Coun Pauline Markham.

During her speech, she spoke about how Barnsley is committed to supporting the armed forces community and commemorating their invaluable contribution to protecting the national interests.

“The walkway is for all military personnel to commemorate those who have served, those who are still serving and those who have fallen whether they are on land, at sea, or in the air. I know that the town of Barnsley is proud to support our servicemen and women and would like to show appreciation for the work they do.”

The stones are built with honed granite and the unveiling saw 12 flagstones featuring the names, service and regiments of Barnsley’s servicemen and women. The first stone is dedicated to Private Matthew Thornton from the 4th battalion of the Yorkshire Regiment, who died in Afghanistan on November 9, 2011.

His family attended the event and Matthew’s dad, Michael Thornton said: “Matthew was a polite young man who took time out to help the other soldiers around him if they were struggling. He loved the army and comradery and was honoured to be corner guard at the cenotaph in Barnsley in 2010.

“The feedback from his Afghanistan camp was that he conducted himself more than a territorial soldier and he went on to receive the Rushworth Trophy in 2010. His mother and I are extremely proud of his achievements, and we’re pleased that we’ll be able to honour his name on Yorkshire’s first commemorative walkway.”

Dan Jarvis said: “Barnsley’s got a long-standing tradition of reflecting on the sacrifices people have made serving in our armed forces and I think it’s incredibly important we continue to do that.

“I’m really proud the local council and everyone has come together today to unveil this important monument which will give people a bit of space in order to think about the service and sacrifice of those who have lost their lives serving our country and I think it’s always important we do that.”

Stones for the walkway can be purchased for £250 by visiting the Barnsley Council website and applicants will be asked to provide proof of service.

Wendy Lowder, executive director, said: “We’re delighted to open our very own commemorative walkway as a dedication to those who have and continue to serve our country. It’s a wonderful way to honour the service and sacrifice for our freedom that we too often take for granted.

“We’re proud to raise the curtain on the very first walkway in Yorkshire. We hope that it can be a true tribute to our armed forces and their families, and hope that the community will see the impact of preserving our history.”

Yiannis Koursis, principal and chief executive at Barnsley College, said: “The walkway is a fitting way to commemorate the sacrifices of both current and past servicemen and women from our town. We are pleased to have worked alongside Barnsley Council to provide an area which their families and friends can visit to reflect and think of them.”