Just how low will thieves stoop? 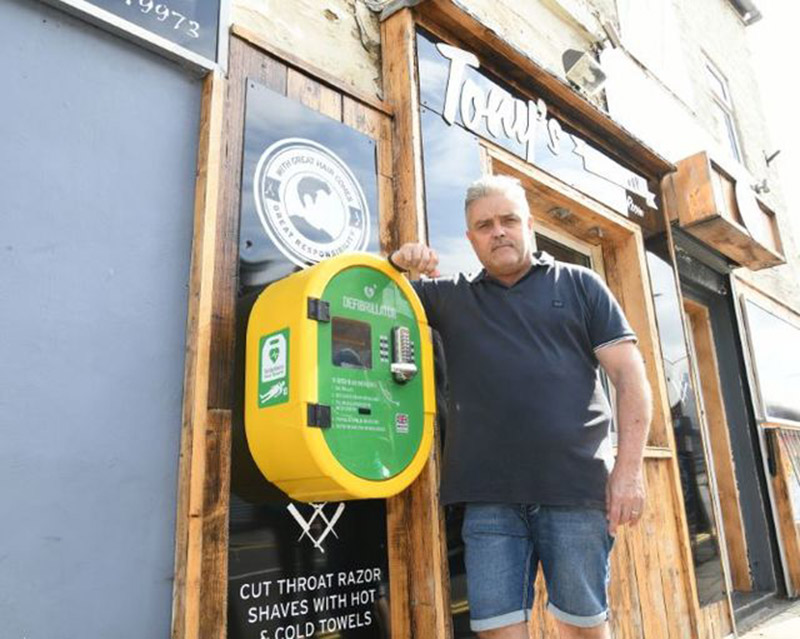 A BARBER has been left reeling after the defibrillator which was funded by his local community was stolen after being used during an incident.

Tony Batty, 53, owns and runs Tony’s Barber Shop on Racecommon Road. In October 2018, after fundraising within his local community, Tony had raised the £1,500 needed to buy a defibrillator which was fitted to the side of his barber shop.

“It’s better to have one close when someone needs it because it could save someone’s life and is quicker than waiting for the ambulance to arrive.”

On Saturday August 10, the defibrillator was released from its cabinet for use in an emergency but it was not returned and Tony was contacted and asked to check on the whereabouts of the equipment.

“I got an email on the Monday from the Yorkshire Ambulance Service, asking me to check on the defibrillator because it had been released but the system showed that it had not been returned.

“I thought at first that maybe the batteries had gone or something and that the defibrillator would be sitting there but when I went round to check the cabinet, it was empty.”

Tony discovered that a resident of Racecommon Road had contacted the ambulance service, reporting that someone they lived with was having a heart attack.

The code was given for the defibrillator but the lifesaving equipment was not needed as the ambulance arrived to take the patient to hospital. However, the defibrillator was not returned to its cabinet after the incident.

“Last week, the ambulance crew went to the address to ask for it back but the residents refused and now it has been lodged with the police as a theft,” said Tony.

“I think it’s really low that they want to pinch a piece of lifesaving equipment. “For someone to abuse this equipment is disgusting.

“We raised money for this equipment for the community to help save lives and I can’t believe someone would want to do such a thing.

“Maybe they are planning to sell it, I can’t say, but it won’t really work if the patient has a heartbeat because it only shocks when there is no heart rhythm so they’ve basically got a useless piece of equipment.

“It’s just scandalous that they can do this.” Tony has been loaned another defibrillator from the ambulance service to fill the cabinet while investigations are ongoing.

“I would hate to think that someone who really needed the defibrillator couldn’t use it because the other people are refusing to give back our other one.

“Luckily we have been given one as a loan until the other is returned. A lovely gentleman has also offered to come and fit CCTV outside the shop as well so that if this happens again, we will know who has done it.”