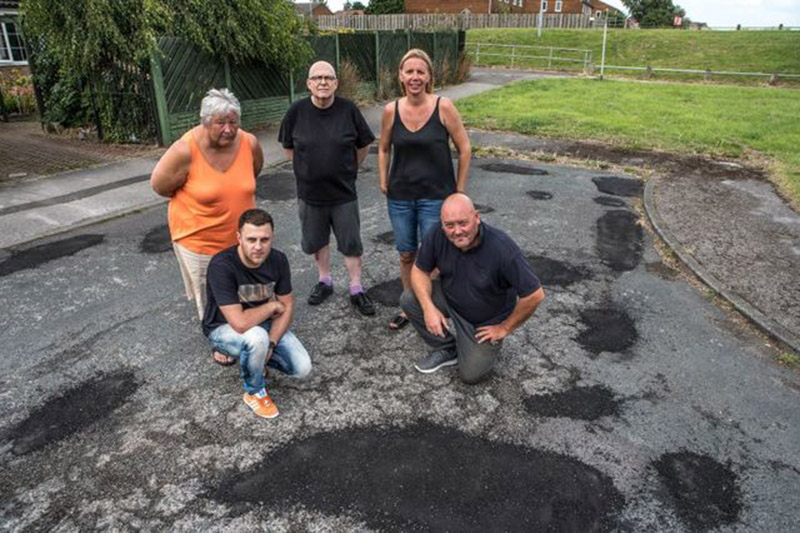 RESIDENTS of a Monk Bretton street were left feeling baffled this week when road repairs left their street looking rather patchy and looking like ‘the surface of the moon’.

The residents of Stretton Road were fed up with the large number of potholes on their road and lodged a complaint with the council to rectify the issue.

However, they were left angry when the repairs left their road looking patchy, with loose tarmac being dragged into people’s homes.

“The potholes have been there for years,” said resident Bobbie Marsden. “You pull in and there’s a big trench which isn’t safe. They just kept springing up because the road was in such a bad state of repairs.

“They came to fix the potholes and the state they’ve left the road in is disgusting. It feels like they’ve just come and turned their bucket over and emptied it onto the road. “

The tarmac is very gritty and people are walking it into their houses and cars because there’s that much of it.

I’ve been here for 19 years and not once has the road been resurfaced and now it just looks ridiculous. I pay council tax for this and I don’t think it’s good enough.”

Coun Phillip Lofts, said: “Having viewed Stretton Road, I fully sympathise with residents. The road looks like the surface of the moon and has clearly been patched over the greater part of its surface.

The road would clearly benefit from resurfacing and I have brought the matter to the notice of the cabinet spokesperson.”