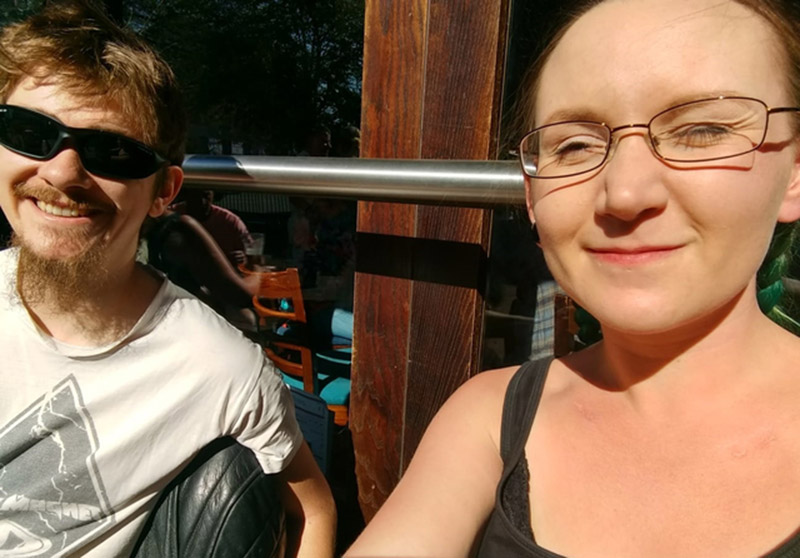 A COUPLE who ended up stranded in Barnsley when their motorbike broke down are searching for the security guard who looked after them while they awaited rescue.

Charley Johnson, 27, and her partner Martin Jorgensen, 30, from Manchester, were on their way to Malton, North Yorkshire to visit Charley’s godmother for an Easter Sunday lunch.

The couple decided to take a scenic route through Barnsley on their Triumph Speed Triple. The couple made it as far as Alhambra Roundabout, when the bike came into difficulty.

Charley said: “The weather was lovely so we decided to ride through Barnsley but when we reached the roundabout we broke down. We were able to move the bike down Wesley Street before coming to a stop on Lambra Road.”

Unable to get the bike moving, the couple called the RAC who came to assess them at 12.10pm.

But they were told they would need a recovery truck to take them home and the expected wait was nine hours.

They were told to ‘find a pub’ because they were in for a long wait. But they decided to wait with the bike in case it was damaged or stolen, and a security guard approached the couple, offering to assist.

“When he saw the RAC man had gone he came across. He kindly offered to watch the bike while me and Martin went for something to eat. His act of kindness really helped us because we were hungry and in an area that we did not know," said Charley

“We went to get some food and the Barnsley folk were so welcoming and friendly. It made us smile in a situation that was not the best. We returned to the bike and the security guard continued to check on us and make sure that we were OK.

"He even came across with an apple and a cereal bar for me and Martin to keep us going while we waited for the recovery van.

“At 9pm the recovery van finally arrived to take us back to Manchester and we didn’t have the opportunity to thank the security man for his wonderful act of kindness that day.

“It’s the first time we’d visited Barnsley and we couldn’t have asked for a better reception. The security man went above and beyond to make sure we could eat and explore a little bit while we awaited our recovery but we didn’t catch his name.”

The couple have contacted the Alhambra Centre to find out if the security man worked there but they have had no luck and two months on they are still searching for the mystery security guard.

“We would love to thank him for what he did that day. It’s not often that a person would go above and beyond for two complete strangers. It will be wonderful to thank him and pass some positive feedback to his employers.”