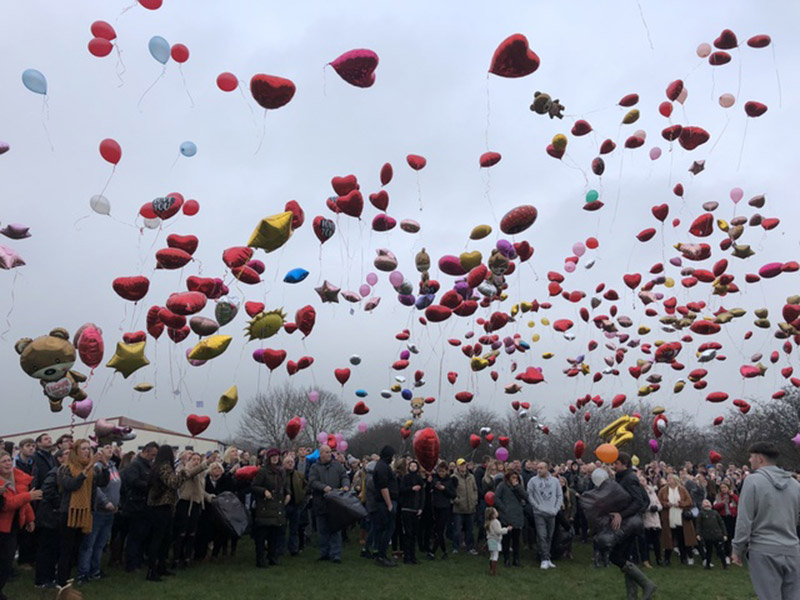 HUNDREDS of people gathered to pay their respects to a teenager killed in a car crash as her family urged youngsters to stay safe when in a car – while investigations into the tragedy continue.

Macey-Jay Frudd, 16, died after the car in which she was a passenger collided with a tree in the early hours of last Sunday morning on Broadway.

Her brother Morgan organised a balloon release on Sunday, one week on from the crash. The emotional tribute was staged at the Fleets pond – a place where Macey loved to visit. He gave a short speech thanking people for coming before the balloons were released into the air.

Her parents, Jason and Tamantha Frudd, spoke to the Chronicle following the balloon release. Tamantha said: “It’s a lovely feeling to see everyone that has turned up for her. “It was a shock really, I didn’t know she had so many friends.

“She was loving, very mischievous but we used to always laugh. She loved animals and dressing our two dogs up.

“We’ve had so much support. I feel like my world has ended. I know she would want us to be strong for Morgan so we’ve got to do that now.”

She gave a stark warning to young people across Barnsley about staying safe, especially when driving or out in cars with friends.

“Just be aware of what the consequences are. Kids think they’re invincible but they’re not. Just stay safe and listen to your parents.”

If you have any information regardig the accident contact 101 quoting incident number 94 of January 13.