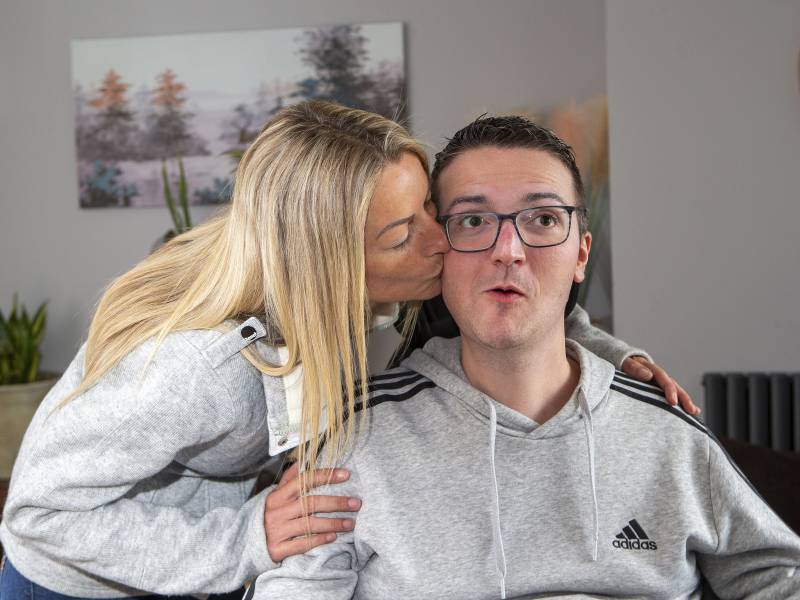 FIVE years ago Brynn Westwood was living in a care home after losing his mum to cancer.

The future was uncertain for the 21-year-old who was living with duchemme muscular dystrophy, weighed 17 stones, self-harmed and was terrified to go out.

Today, Brynn, now 26, has a happy and fulfilled life he loves surrounded by equipment that gives him independence and receiving the best of care all thanks to the love, devotion and sheer hard work and determination of his auntie Martine Bradley.

Martine, 42, of High Street, Royston, gave up her job in health and social care, adapted her home and employed a team of personal assistants to ensure that Brynn had the best life possible.

“I made a promise to my sister, Nicola, that if anything happened to her I would look after Brynn and when she died at 37, I knew that I would do that. Brynn lived with other relatives at first but that didn’t work out and when he ended up in the care home I knew he should and would be with me.

“I wanted him to be able to do as much as he could for himself. We adapted the bungalow we live in, had doors widened and hoists installed and we encouraged him, got the equipment he needed and looked at how we could improve his life.”

Healthy eating and a new-found purpose led to Brynn losing four and a half stones which saw his breathing improve and his confidence soar. He still suffers from anxiety which increased during lockdown but, with the support of his auntie and his personal assistants, enjoys new experiences and hobbies including arts and crafts and music.

“Whatever challenges we get, we face them and find a solution. I strongly believe that everyone should be treated the same and I will always come out fighting to get Brynn what he needs.”

Brynn has complex care needs, he has no movement apart from in his hands but through Martine’s determination and creativity, Brynn can now feed himself and even goes shopping himself with the help of staff at local shops.

He also volunteered as an activities assistant at Mapplewell Manor care home prior to lockdown, entertaining the residents with his singing and he is now well-known around Royston having gained the confidence to go out with his personal assistants and sometimes on his own, even enjoying the occasional visit to his local pub.

Personal assistant Michelle Pottage, fondly called Auntie Shell by Brynn, has helped care for him since he first came to live with Martine and her husband Tristan, said: “If it wasn’t for Martine’s knowledge and hard work with some of the situations they have had to face, I don’t believe that Brynn would still be here. She really is a shining beacon and helps so many people as well as Brynn.

“And Brynn can go anywhere in the village now and people recognise him. Everyone looks out for him.”

Brynn’s life has been transformed and he knows that’s all down to his Auntie Martine.

“There’s nothing more I could wish for I’m really happy with my life,” he said.

And this remarkable young man decided that he wanted to say a very special thank you to Martine by nominating her in the Carer of the Year category in the Proud of Barnsley awards.

“When I lost my mum to cancer, my auntie, my mum’s sister gave up everything to help me become independent as far as I could be.

“I moved into her home and she hired me a top team of personal assistants to give me control back in my own life.

“Aside from giving up her work and caring for me full time she is also the treasurer for a community group called Royston Friends Association where she volunteers helping the community.

“She is very selfless and puts everyone’s needs before her own.

“I feel she needs to know we love her and thank her for everything she does to keep us together as a family and also as a community.

“I only have use of my hands but there is nothing I can’t do myself due to my auntie’s creativity and best efforts to give me back my independence.”

Martine was shocked but happy to hear of the nomination: “I was blown away when I heard. Brynn can sometimes be absorbed in himself and it was nice for him to show his appreciation.”

Brynn said: “I just wanted her to know that she is amazing and a very special part of my life. I love her.”