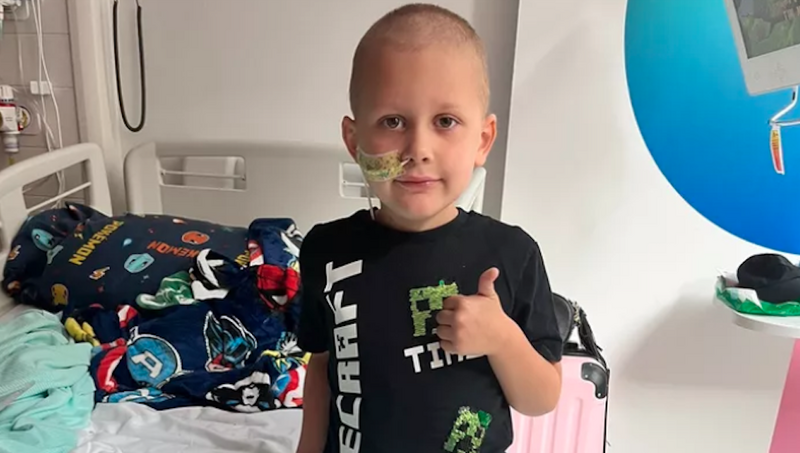 A STAINCROSS couple have been left broken after their young son was diagnosed with a rare form of cancer.

Five-year-old Carter Jones has a Wilms tumour a rare childhood cancer which affects just 80 children every year and subsequent scans have shown that the cancer has spread to Carter’s vena cava, the main vein to the heart.

He underwent a major operation on Wednesday an open heart bypass and will then need a further six months of chemotherapy.

The shocking diagnosis came on June 26, a day that started like any other, with Carter waking up and going to the toilet.

His mum, 27-year-old Aime Finney, told the Chronicle: “Carter came into my bedroom to tell me that his wee was brown.

“I just thought he was dehydrated - luckily he hadn’t flushed the toilet so when I went to look it was just pure blood that he had weed.

“I rang 111 but before I got a call back I went straight to A&E because I knew something wasn’t right - but I would never have thought it would be cancer.

“We were in A&E for eight hours seeing doctors but they didn’t even need to run any tests. The tumour was that big they could feel it. He was basically diagnosed there and then.”

The youngster has unknowingly had the disease all of his life and he now has a tumour on his kidney and has been diagnosed with stage three cancer.

“Everything happened so fast,” said Aime, of Clovefields Drive.

“It is absolutely devastating I was on my own when I was told. A surgeon and a nurse pulled me into a room, Carter didn’t have a clue what was going on as he was playing with other nurses.

“The surgeon cried and told me about the tumour it was soul destroying.

“You just don’t expect it to happen to your children, it’s an awful disease.

“A lot of people say they can’t imagine what we’re going through and it’s right, I don’t have the words to describe it.

“I wouldn’t wish this on my worst enemy.”

Subsequent scans also found that the cancer has spread to Carter’s vena cava - the main vein to the heart.

Carter has already had some chemotherapy sessions and his hair was lost almost immediately.

A fundraiser has been set up by Aime’s friend Jodie Duggan, and more than £10,000 has been raised in the first couple of days.

She added: “My friend got in touch and asked if she could help in any way by setting up a Go Fund Me page.

“Me and my partner Nick are both self-employed.