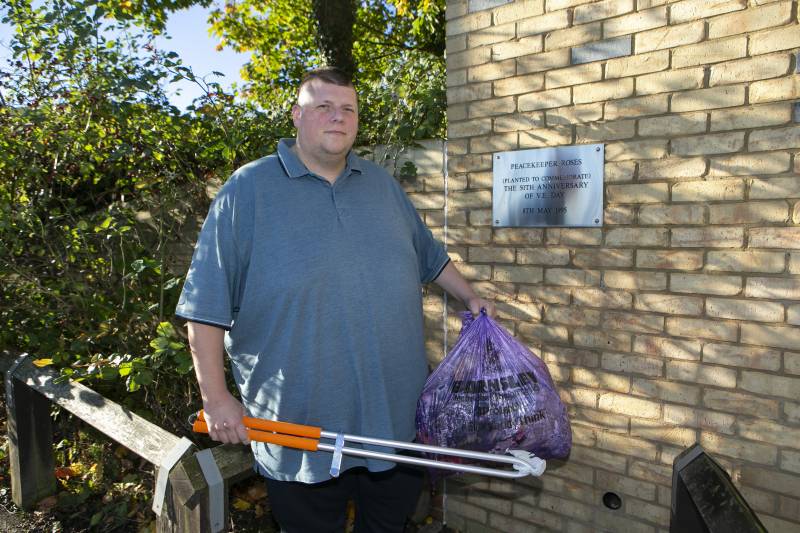 RESIDENTS held a community litter-pick last weekend after being ‘disgusted’ by the state of a war memorial.

Volunteers staged a clean up on a war memorial patch owned by Morrisons, on the corner of the A628 and Upper New Street.

Two members from the ‘Poggy Pickers’ litter-picking group – Nick Wiseman and Richard Jerome – along with Liam Hardcastle collected nine bags of litter from the site on Sunday.

Liam, 36, said he had been ‘disgusted’ by the mess at the memorial after driving past it regularly on the school run, and felt something needed to be done.

He said: “I feel that this area is overlooked.

“Even if the council don’t own it, after they’ve spent millions updating the town centre, care should be taken to keep routes into the town centre clean, especially somewhere that’s dedicated to our fallen.

“You would think councillors would pick up on this and do something about it.

“The wreaths that have been laid were faced down and covered in litter.

“To think somebody has taken the time to come and lay a wreath and someone has then done this to it, is just disgusting.

“Especially on the run-up to Armistice Day, the memorial should be shown so much more respect.”

Morrisons have said that they are aware of the problem and that they are trying their best to keep on top of the litter, and are in communication with the council to find a long term solution.

Coun Chris Lamb, cabinet spokesperson for environment and transport, added: “It’s important that we’re all responsible with our waste, and that we all look after our local area where we can.

“As part of our #EverybodyThink campaign we’re encouraging everyone to be wise with their waste, and take their litter home with them if they can’t find a suitable bin.

“I would like to thank the fantastic businesses and members of our communities who take the time to litter pick and clean up in their areas.

“We all have a part to play in keeping our borough tidy, and our volunteers do really great work in looking after and showing pride in where they live.”

The council made no comment on the state of the individual memorial, stating that because they don’t maintain the site they didn’t want to comment on it individually.