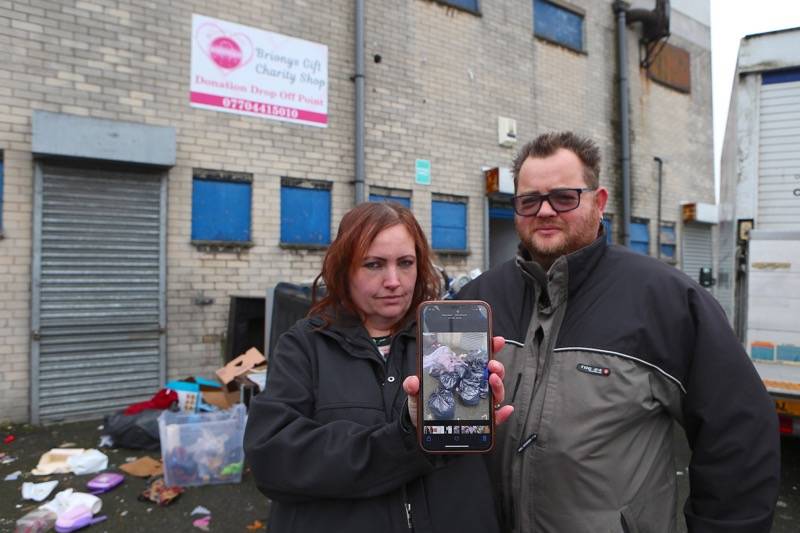 A WOMBWELL charity shop set up in memory of a little girl who died of cancer had a nasty surprise this week after they thought they had received more than ten bags of donations – but they turned out to be full of dirty nappies and rotting food.

Briony’s Gift, on High Street, aims to provide gifts for seriously ill children in hospital, and was set up by parents Meayla and Darron Woodward after the death of their three-year-old daughter Briony in 2007 from neuroblastoma.

This week a number of black bin bags were left in their donations section outside the store and were at first thought to be donations, but upon a closer look Meayla realised they were bags of fly-tipped rubbish.

She said: “Over the weekend I arrived at the shop and I saw that there were ten bags and I thought they were donations, so before I went in I checked them it and it was full of dirty nappies and rubbish.

“I posted it on our Facebook page and then when I arrived at the shop today someone had done the same thing and we have to go and dump all the rubbish ourselves.

“For me this is personal because the shop is in memory of my daughter so there isn’t a head office – we have to deal with everything internally.”

In a year where Meayla has been unable to fundraise due to Covid restrictions, she says implementing CCTV is now a must though it is a cost they could do without.

“It’s tough enough as it is without people doing things like this because we’ve been unable to fundraise this year due to Covid,” she added.

“The people who dump at our shop must think they’ve got it made because no one bats and eyelid because they look like donations.

“We are going to get CCTV but it’s another cost that we could do without.”