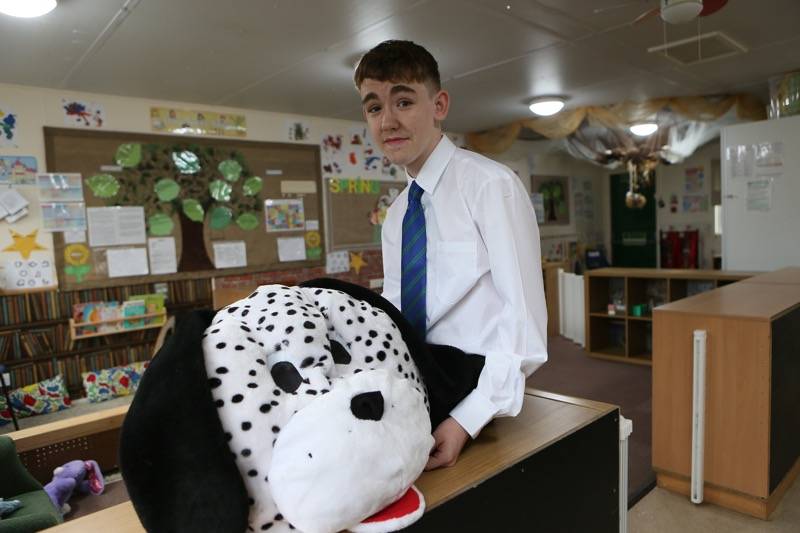 A TEENAGER who has been lifting spirits of youngsters in Barnsley throughout lockdown by dressing up has been nominated for a Proud of Barnsley award.

Chase Pyne, 15, of Jump, has been helping out at Tots2Teens – a nursery in a deprived area – by dressing up in a dog costume to ensure that the kids were happy when they were unable to physically attend the nursery.

His mum, 40-year-old Joanne Pyne, runs the nursery and she says she can’t stress how important Chase has been to the safeguarding of kids in the area.

“There’s not many 15-year-olds that would dress up in the boiling heat for seven and a half hours a day to go and see the kids,” Joanne added.

“We run a nursery in a deprived areas so the children here all come from disadvantaged backgrounds, when we went into lockdown we had to think of ways in which we could remain in contact with them.

“We’ve been delivering activity packs to the children and Chase has been a great help in dressing up as the mascot and getting the packs together.”

Joanne believes that without Chase a lot of the children at the nursery wouldn’t have bothered with their work, or even coming to have a chat through the window during lockdown.

“He knows himself how important it was to keep in contact with the children, he’s been absolutely amazing throughout it all,” she added.

“I think that a lot of the kids would have stayed in bed if they wouldn’t have known Chase was going to be there in the dog costume – he’s been such a great help.”

Upon hearing of her son’s nomination in the Young Superstar category, Joanne added: “I’m so proud of him for everything that he’s done throughout lockdown.

“A lot of kids his age get quite a lot of bad press, especially during lockdown, for seeing their friends and breaking rules but he’s just not that type of kid – he’d rather see his granddad and he knows how important it is to stay safe.”