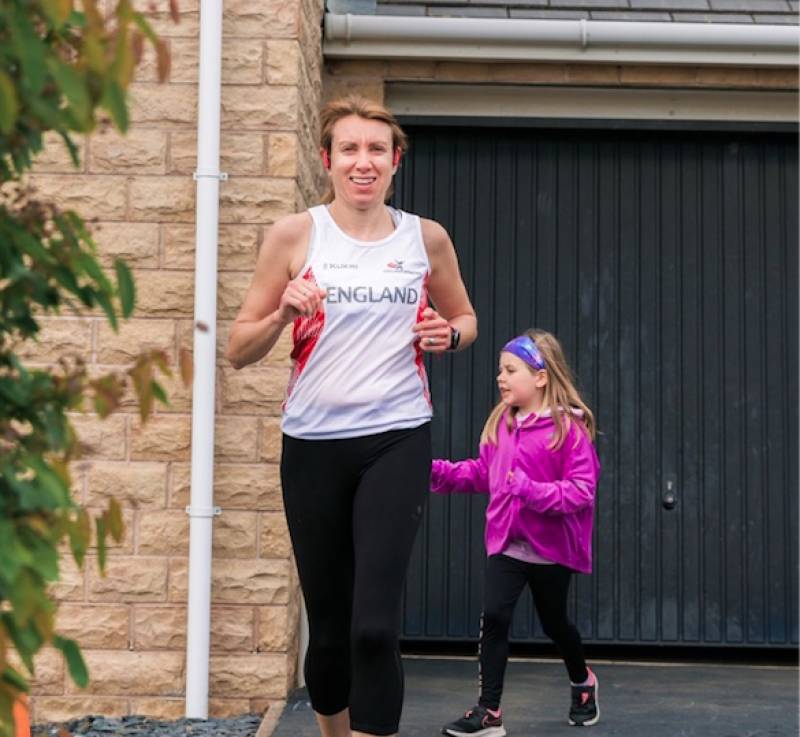 A WOMAN who aimed to run her personal best while raising money for charity ended up doing things a little different – by running a full marathon on her driveway.

Christina Laking, 38, was due to represent England in a 10k run last week and in a half marathon in March but when both were cancelled due to the coronavirus outbreak, she came up with an innovative way to keep training.

She aimed to beat her longest distance of 18 miles by running laps around her driveway, as well as raising money for Cancer Research – but she inadvertedly ran a full marathon instead.

“My watch wasn’t working properly,” said Christina, of The Grange, Woolley Grange. “It was saying I was doing around three miles per hour which I knew was wrong but by the time I noticed I had already run a fair distance so I just kept going until my watch said I had done 19 miles.

Christina ran more than 57,000 steps over six hours and was supported by her children Martha, seven, Teddy, six, and Thomas, four, as well as her husband Richard.

“They were great,” added Christina. “They kept bringing me snacks and shouting jokes at me to make me laugh.

“It was difficult to find my stride and get going because it was such a small space and normally I do run faster than I was able to on the drive.

“I thought I would feel quite dizzy but once I got used to it I didn’t feel ill or anything. I was worried going into it because I did a test run the week before and I felt travel sick, but on the day it was fine.”

Christina ran to raise money for Cancer Research as her friend, Dave Bennett, was diagnosed with cancer last year.

While Christina originally set out to raise £100, she has so far raised £615 through her marathon effort.

“I couldn’t believe it,” said Christina. “I was only aiming to raise a small amount but to raise so much is incredible.”

Despite her efforts, Christina said she was in no hurry to repeat the challenge.

“I’m proud that I managed to run a marathon but I would never run around my drive again. The day after my legs were aching and I think my neighbours thought lockdown had gotten to me.

“How many people can say they ran their first marathon on their drive?”