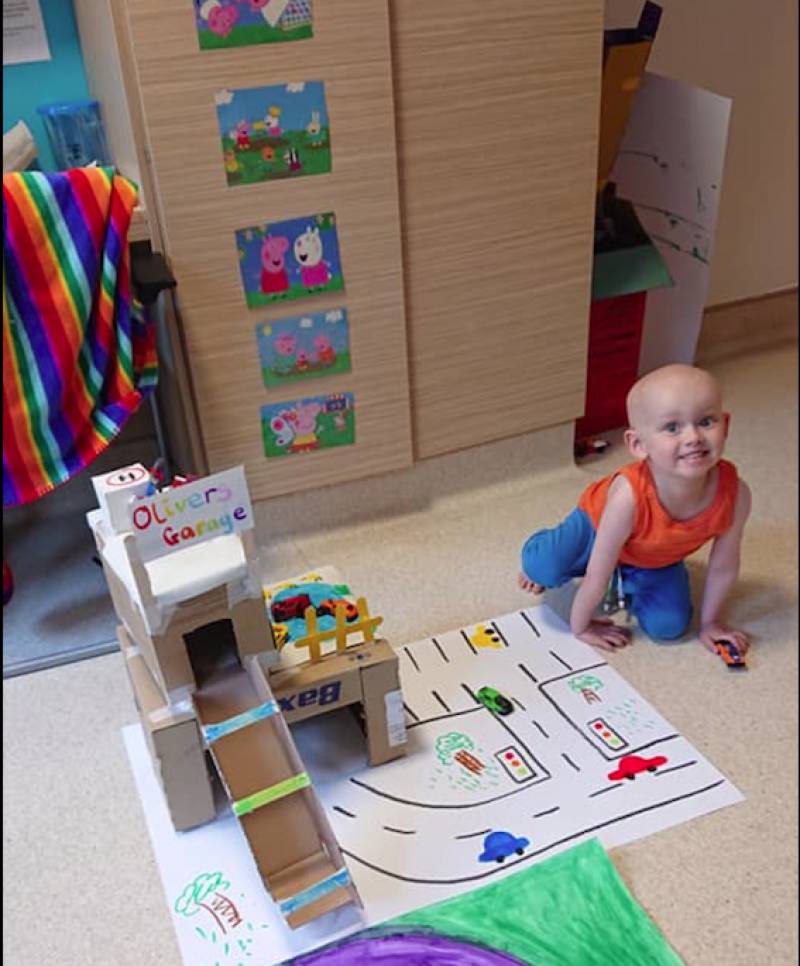 A YOUNGSTER battling an aggressive form of cancer is still smiling his way through his latest hospital stint – and generous Barnsley residents have been thanked for breaking the £120,000 fundraising barrier for further lifesaving treatment.

Oliver Stephenson, four, was diagnosed with high-risk neuroblastoma in January and, although the cancer spread from his kidney to his bone marrow, skull and eye sockets, the youngster’s story continues to inspire an ardent following of well-wishers.

The innovative ‘bivalent’ vaccine, which will cost about £230,000 and come after Oliver’s chemotherapy has run its course, has been proven to give kids a much higher survival rate and decrease the chances of cancer returning in following years and it’s this that his family want to pursue in the USA.

Almost 3,000 people have donated to the bid since a Just Giving page was set up in the days after Oliver’s diagnosis.

His mum Laura, of Stairfoot, said his bone marrow biopsy came back clear of cancer recently, and the youngster had successful surgery recently to remove a kidney tumour.

Music veterans Marti Pellow and Tony Hadley have also sang virtually for Oliver, whose fundraising bid has surpassed its halfway point in the last week.

She added: “It was such a surprise hitting the 50 per cent point but we don’t stop there, we keep going until the job is done. The next mini target for us is to have less than a six-digit figure left.

“Oliver’s bone marrow is completely free of disease. His scan showed no signs of live disease and his MRI showed a huge reduction in activity on his eye sockets and skull.

“His tumour is ‘tiny’ and means that his later surgery should be a smooth operation. In the words of our wonderful consultant, ‘Oliver has responded amazingly well to treatment and it is the absolute best we could have hoped for’.

“There is still a long road ahead with surgery, further chemo, radiotherapy and immunotherapy but it is truly amazing news so far.

“I’d like to thank everyone for their messages of love and support. Oliver is a very much-loved little boy and he will handle this the same as he has everything else – like a super hero.

“This is obviously fantastic news and we are thrilled.

“We still have such a long road ahead but we have proof that the chemotherapy is working.

“If there is one thing that this journey has proven it is that good people really do exist and we cannot thank them enough for their fundraising.

“The wires, tubes and drugs don’t bother him but being stuck inside the same four walls is hard work for an energetic four-year-old.

“As always he has been a little superstar and we couldn’t be more proud of our little hero.”

However, further blood tests came back as abnormal and subsequent scans revealed a 3cm tumour on his kidney which has reduced in size since the treatment began before doctors uncovered that the cancer had spread.

Friend Lyndsey Adams, who set up the Just Giving page, said the family is ‘gutted’ they can’t see more friends as a result of the government’s decision on Sunday to not ease lockdown restrictions.

“They were hoping there would be a slight relaxation but imagine what this family are going through while Oliver is in hospital for a full month undergoing lifesaving treatment – only his dad James can be there with him the whole time, his mum Laura and little brother Alfie are not allowed to visit.

“Please continue to stay home to save lives. We are doing amazing, raising the vital funds he will need next year, but we have to keep it going.”