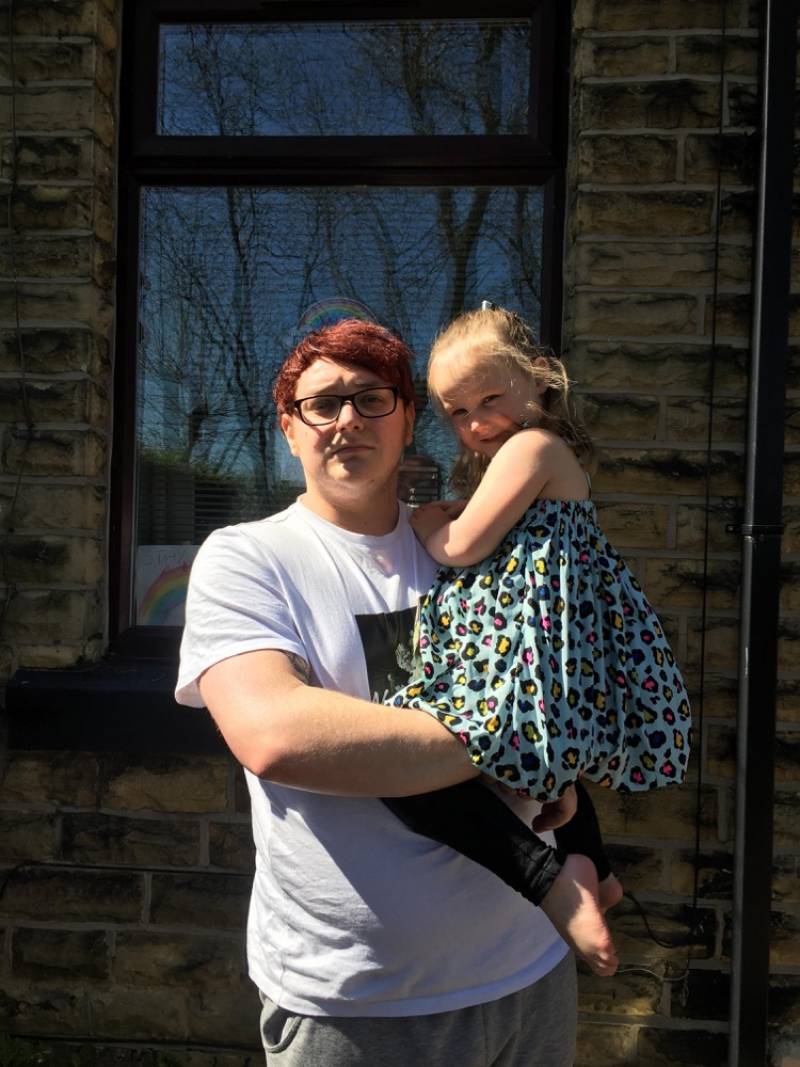 A FATHER was left mortified after their three-year-old daughter had spit wiped down her face by a thug who told her ‘I’ve got corona’.

Matthew Batty, 28, of School Street in Darfield, was walking back from the shop with his daughter Alice-Rose when the incident – which is being investigated by the police – occurred.

He told the Chronicle: “We decided to go the long way round because my daughter wanted to see the rainbows in the window of the care home across the road.

“That’s when she saw four lads riding through the streets on their bikes and asked whether or not she could ride hers when we got home.

“We describe the coronavirus as a ‘naughty bug’ to her because she’s only three, so I explained to her that due to the bug she’s not allowed to go riding on her bike as she needs to remain safe at home.”

Matthew describes his daughter as a ‘social butterfly’, admitting that she’s more than happy to talk to anyone that she can – which unfortunately led to the altercation with the young thugs.

“She politely told the boys that they need to go home off of their bikes so they can stay safe like she was going to do, but that’s when they started hurling abuse at her,” Matthew added.

“Obviously I stood up for her being her dad, but then they directed their abuse at me, but I wasn’t having any of it, so I decided to walk off back home.

“That’s when I heard one of them trying to bring up phlegm and the next thing I knew I felt spit land on my back, something which really caught me off guard.”

This wasn’t the end of the ordeal for Matthew and Alice-Rose though, as the same teen then wiped spit onto her face before telling the young girl that he had the virus.

“When he wiped it on her face I saw red, and started shouting at the kids telling them to go home, basically screaming at them in a fit of anger,” he said.

“Then one of them tried to steal my shopping as I turned around so I swung my bag in self-defence to get them away from us, it only had a bottle of pop in and some other essential items but I managed to stop them from taking it.

“That’s when my attention turned to my daughter, she was clinging onto my leg in fear, but I was grateful that she was still there.

“It was at this point that we decided it would be best to go home into a safe environment.”

Matthew and his wife Katie phoned the police as soon as they could, and they both said they’re extremely grateful of how amazing South Yorkshire Police were.

“The police were fantastic, they were so reassuring which really helped all of us,” Matthew added.

“My daughter was so thankful of everything that the police had said they would do that she gave them one of her Easter eggs, we can’t thank them enough.

“Obviously it’s had an effect on Alice-Rose, like I said she’s a social butterfly and now she’s really wary of leaving the house, but it’s something that we’ll overcome in time.”

A spokesperson for South Yorkshire Police said: “Officers are investigating after a three-year-old girl and her dad were spat at during their daily exercise in Barnsley.

“It is reported that at around 3.30pm on Sunday April 19 the pair were walking along Pinfold Lane when they saw a group of four teenagers on bikes.

“When the child told the teenagers that they should go home, it is reported that one of them spat into his hand and wiped it on her face, saying he had Covid-19.

“The same teenager then spat towards the pair again before riding away with the rest of the group.

“If you have any information which could help please call 101 quoting incident number 519 on April 19.”