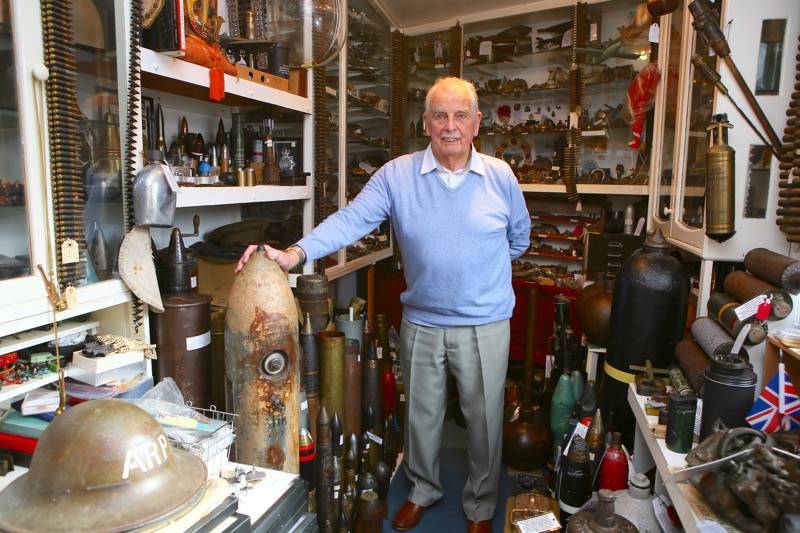 HOPES are rising that a home can be found for a unique collection of wartime memorabilia in Penistone.

Town councillors have been told that it is possible a particular pot of money could be used to house artefacts gathered over a lifetime by resident John Ownsworth.

And fellow ward member Robert Barnard has told town councillors that there had been ‘a positive response’ to the idea of housing Mr Ownsworth’s collection in Penistone.

This week, Mr Ownsworth, who is 82, said he was delighted at the development.

And he expressed hopes that the town hall would be used as a museum ‘to breathe life into that area’.

“I knew about the Principal Towns fund and hope this can come to fruition,” he said. “Penistone Town Hall would be ideal and it would bring that part of town back into use. It is a bit desolate down that end. It could be brought back to life.

“I just hope it doesn’t get forgotten when this virus crisis is over.”

Coun Greenhough said the idea of using the funds was being explored.

“It is ongoing,” he said. “We are pressing for more progress and for funds not to be just left in central fund. We could see better progress on this.”

Coun Barnard added: “There has been a positive response to the idea of accommodating John Ownsworth’s collection in the town. It could be on a rotating or static display.”

Mayor Gillian Millner said: “We look forward to hearing more about this.”

The issue of the collection arose when Coun David Wood told town councillors that Mr Ownsworth had had offers from museums elsewhere keen to have the memorabilia.

Since then, a delegation of councillors have been to Mr Ownsworth’s home to view the thousands of artefacts and the collection’s owner is anxious for the treasure trove to stay in Penistone.

“I have been pushing for this since 2009,” he said. “During the Second World War especially, Penistone was very important and many people are unaware of that.”

An author and military historian, Mr Ownsworth visits schools to give exhibitions about the artefacts which have been his life’s work. “The kids can’t get enough of it,” he said. “They are often more interested than the adults. I want this to be out there so local people can discover what happened during the war years.

“The more people see this and realise how important it all was, the happier I will be.”

Among the items he has collected since the 1940s are an armour piece made by the then local David Brown works; an impeller blade for the first jet engine also made locally; belts of ammunition and a cross-Channel German gun cartridge which the Ownsworths use as a coffee table.

He admits he would ‘be lost’ if the collection is removed from the extension he had built specially to accommodate it.

“But if it was in Penistone I would still be able to see it,” he said. “And I could help set up the display. I am 82 now and I want this to happen sooner rather than later.”