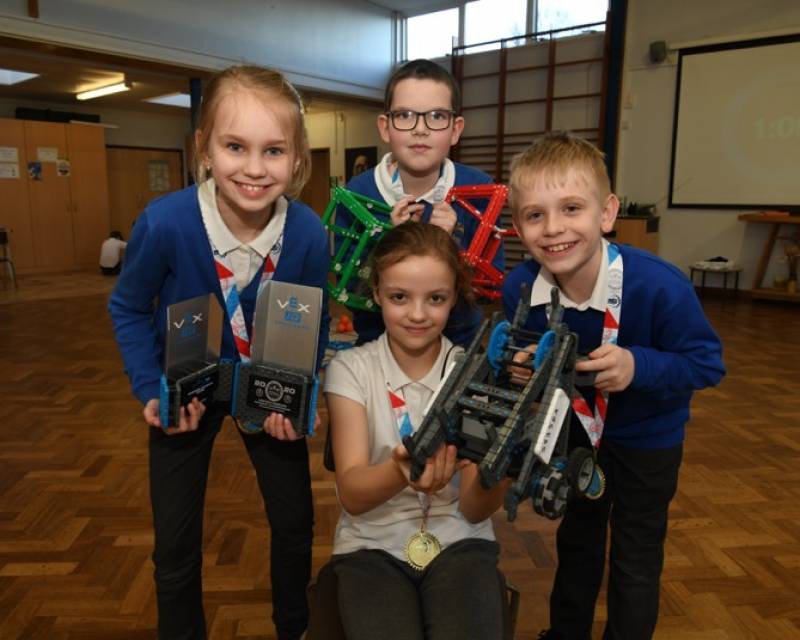 A GROUP of primary school children who showed off their robotic skills at an international tournament have secured a place in the finals in the USA.

Four pupils from Our Lady and St Joseph’s on Fitzwilliam Street, Wath-upon-Dearne, competed in the national Vex IQ Championships.

Vex IQ is a worldwide robotics competition in which children from school years three to nine research, design, build and program a robot to do a specific task.

The team, called the Fantastic Fantoms, participated in the national finals in Birmingham where they achieved the highest ever score recorded in the UK for the team work challenge at elementary level.

Following their win, Oliver Smith, Daisy Stone, Thomas Cosgrove and Emilia Sichy, in years five and six, have been invited to attend the finals which will take place in Kentucky, USA, next month.

There they will compete against 1,000 schools from across the world, representing the UK in the hope of becoming world champions.

Tom Shillaw, who is a year three teacher but leads the Vex teams at the school, said that the team are working hard to prepare for the finals, spending their lunch breaks practicing.

“I sometimes have to remind the kids to eat because they’re so dedicated to practicing for the finals,” said Tom

“This year we’ve had three Vex teams and the Fantastic Fantoms have made it to the final which is amazing. When they went to compete their robot was deemed to be too tall so they had to re-build and re-code it in a short space of time, and to go on and win with a newly coded robot was incredible. I was gobsmacked.

“I’m in awe of them – it’s incredible what they have achieved. We have had previous groups come this far but this team is definitely one of the highlights.

“They’ve inspired the school so much so we now ask children to complete an application form to join the club.

“They’re spending every spare minute practicing and we want to go there and win.

“We’re working hard to secure sponsors and raise funds for this trip because they will be representing the UK which is an opportunity they cannot miss.”

Vicky Smith, Oliver’s mum, added “I can’t believe the team have reached the finals. To me it’s very mind-boggling but they understand what they’re doing and it’s incredible how well they code these robots.”

Vicky added: “This is an incredible opportunity and we want to support them as much as possible.”