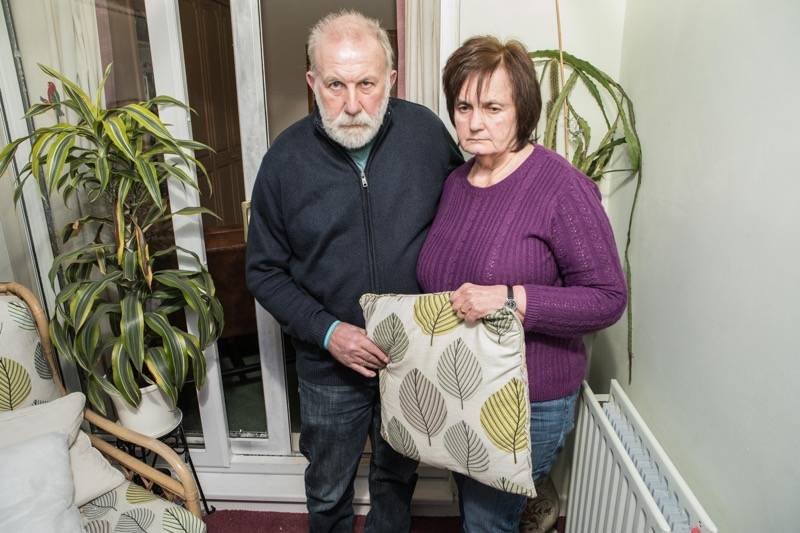 A PARKINSON’S sufferer and his wife have been left feeling ‘vulnerable’ and unsafe in their own home after burglars robbed them of their most prized possessions.

Eric and Heather Evans returned to their home on Strafford Walk, Dodworth, on Tuesday to find their door had been prized open and their safe – with all their valuables inside – had been taken.

“We were on our way home when we got a phone call from our neighbour to say that the police where at our house,” said Heather, 68. “Our neighbour had heard a noise and saw some men coming out from the back of our house pushing a wheelie bin which they put into a car and sped away.

“Our door had been broken and our conservatory doors were smashed to bits – it was horrible seeing our home like that.”

Witnesses reported seeing three men force the couple’s blue wheelie bin – which they used to cart away the safe – into an orange-coloured car which then drove in the direction of Dodworth’s High Street.

The safe contained the couple’s valuables, as well as many sentimental items which they say are ‘irreplaceable’.

“There was a watch in there that I got Eric for his 21st birthday, my dad’s war medals and scans from when our daughters were pregnant,” said Heather. “My engagement ring was also in there and these are things that we can never replace.

“They’re sentimental to us and very precious – it’s not so much about the money as the personal things that were in there.

“We were always told to keep our valuables in a safe and now I feel that has backfired on us – they walked past iPads and our TV but they took the one thing that has the most sentimental value to us inside.”

The burglary has left the couple feeling unsafe and vulnerable in their home, and Heather fears for her husband who is suffering with Parkinson’s disease.

“Eric was diagnosed about six years ago but the symptoms started long before that,” she added. “He sometimes gets a bit confused and had paranoia about someone breaking into the house – I don’t know how this will affect him now this has happened.

“He used to be a locksmith and would go out to houses that had been burgled and change the locks and work with the police – it’s horrible now we are on the other side of it and need someone to help us after this has happened.

“I feel very unsafe in the house at the moment. It’s made me scared to leave home because I don’t want them to target us again – Eric is vulnerable as it is and now our home has been invaded by strangers.”

Police enquiries are ongoing. Anyone with information is asked to call 101 quoting crime reference number 14/43226/20.