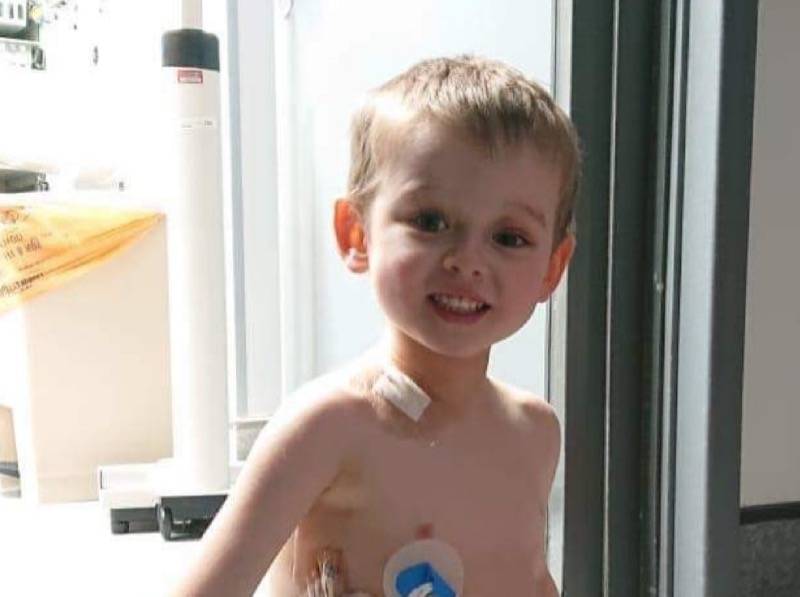 GENEROUS Barnsley residents have been thanked by the family of a four-year-old who is smiling his way through gruelling chemotherapy treatment – after more than £12,000 was raised in just two weeks.

Oliver Stephenson was diagnosed with high-risk neuroblastoma on January 16 and, although the cancer has spread from his kidney to his bone marrow, skull and eye sockets, the youngster continues to ‘take it in his stride’ according to his family.

Oliver began his treatment just two days after the diagnosis but now well-wishers are coming together to fundraise for potential treatment in America. The innovative ‘bivalent’ vaccine, which will cost about £230,000 and come after

Oliver’s chemotherapy has run its course, has been proven to give kids a much higher survival rate and decrease the chances of cancer returning in following years.

His mum Laura, of Stairfoot, told the Chronicle: “Oliver has to have seven sessions of chemotherapy at Leeds General Infirmary, which works out at one course every ten days, but he’s taking it in his stride.

“It is a long and drawn out process which includes plenty of fluids being put through his body to flush out the toxins. He has found the latest bout a little bit more challenging due to being in an isolated room and not being able to run around the corridors or play with the toys like he could previously.

“He has also had a blood transfusion as his blood count has been on the low side for two weeks now.

“The support we have received from people has been overwhelming and we’re hoping we’ll get to our goal of securing enough money for him to go to America as the treatment there could prevent a relapse.”

However, further blood tests came back as abnormal and subsequent scans revealed a 3cm tumour on his kidney, before doctors uncovered that the cancer had spread.

“He’d been happily playing with his two-year-old brother, Alfie, and going to nursery because he didn’t show any signs of being ill,” Laura added. “He’s still like that now – smiling, laughing and playing. We are hopeful that the external improvements are an insight into the internal impact the chemotherapy is having but our family can’t thank people enough for what they have done and are continuing to do as it means so much to us.”

Family friend Lyndsey Adams set up a Just Giving page which has resulted in more than 500 people donating to Oliver’s cause, and the money generated is set to be added to the growing number of raffles and auctions being arranged.

“Oliver has a long road ahead of him along with his mum Laura, dad James and little Alfie. They have amazing support and offers of help from family and friends which they very much appreciate.

“It is too early in Oliver’s current treatment plan to sign up for this due to him still receiving chemotherapy but because of the colossal amount needed, we are giving ourselves the most time to raise the money for when it will likely be needed.

“Laura and James also realise that people want to help in any way they can and this is one way of doing that.

“Any money raised that isn’t needed for Oliver’s care will be donated to another family in a similar position to them that do need it, or to the various charities that will help them along the way.”