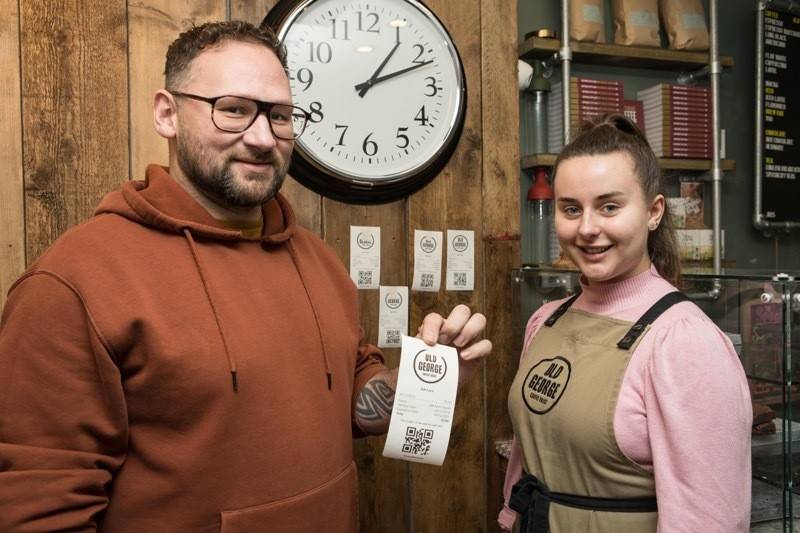 CUSTOMERS at a town centre cafe are ‘paying it forward’ to help people to treat themselves while on a budget. The Old George cafe on Market Hill introduced a Pay it Forward scheme in December which was suggested by customers. The idea of the scheme is that customers can load a small amount of money, usually the price of a coffee or bun, onto a voucher which can be redeemed by others within the cafe if they are in need. “Customers can donate their loyalty points or put some money on a voucher which can be used by other people when they come into the cafe,” said owner, Gareth Derbyshire. “The vouchers might help someone who can’t afford a coffee or some food, or even if a family is on a tight budget, it might help them to get their children a little treat like a slice of cake or something.

“It can be tough for people financially, especially after Christmas and this scheme allows our customers to help other people with a small donation.”Gareth said that the scheme has been successful so far, but insisted that people using the scheme will not be judged for doing so. “The vouchers won’t show up on our till differently, and we have put them on the wall in a place where people can go up and grab whichever one they want. I don’t want people to think we are judging them if they do use the scheme. We’ve all experienced some hard times so if this makes it a little easier then there is no shame in that.”The Pay it Forward vouchers are displayed at the side of the till for customers to use if they would like. To add money to a voucher, speak to a member of staff in the cafe.